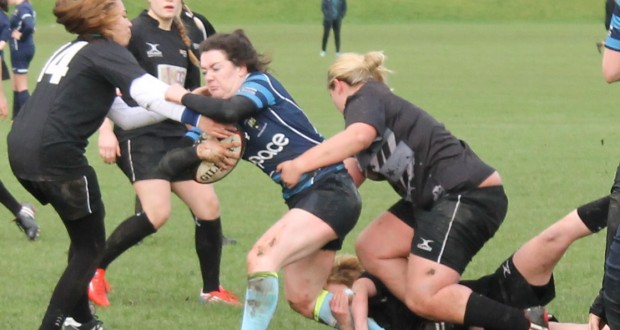 Written by Tyrone Stewart on February 12 2016

Tries from Gunvor Romsbotn, Niamh Harnett, Hannah Barham and Meg Venables helped the Cougars to get one over on their local rivals and return to winning ways in the British Universities & Colleges Sport (BUCS) league after last week’s 22-10 defeat to Kent.

Team coach Fergal Findlay said: “Today was probably the best performance they have put in all year without a doubt. They have, however, been quite consistent and they have played well throughout the season – smashing people. We had the blip last week but people came back from injuries today and smashed it.”

The game started off very competitively with hard tackles flying in from both sides and was more of a war of attrition in the early exchanges as both teams struggled to keep possession and find a breakthrough.

The breakthrough would come for Kingston midway through the first half, after a long drive with a lot of penalties, knock ons and scrums, Romsbotn would crash over the line to score the first of five tries – which was unconverted.

Praise was heaped on to Romsbotn by captain Harnett, she said: “Our number eight, Gunvor – she is a fresher and has never played rugby until this year – throughout the season she has given 110 percent and is definitely one to watch.”

After scoring the first try, the Cougars would assert their dominance and continued to control possession for the remainder of the half, despite there being several stoppages for injury.

They would double their advantage shortly before the half when Harnett herself powered over the line, for the second unconverted try, following another lengthy drive.

“I am bursting with pride, it is unbelievable. Everyone put their heart and soul into this game. This is what we have worked for all year and just goes to show that hard work really pays off.

“It was an unbelievable performance, from one to 15 and the subs that came on, we had an amazing game. I am just so proud of everyone that played.”

“It is our first year in the BUCS league and majority of our team are all freshers who have never played rugby before – so they, literally, started at basics and worked their way up.

“We have a few seniors that are leaving this year but I am so excited for the freshers because they have an amazing season ahead of them next year as well,” she said.

The half would draw to a close with Roehampton applying late pressure, entering the Kingston 22 for the first time, but the home side showed resilience and held strong to maintain their 10-0 lead into the break.

After the break, the game once again became sloppy – with both teams enjoying possession in each other’s halves and trading turnovers.

Kingston would score their third unconverted try, after a succession of injuries to both sides, through Barham – who weaved her way beautifully through the heart of the Roehampton defence to touchdown under the posts to make it 15-0.

Findlay said: “Some of Hannah’s running on the ball was hard to fault and her awareness of the breakdown was great – if the ball is there she is willing to jump down and get it.”

Barham would score her second try, and the Cougars fourth and first converted, about 10 minutes later which gave Kingston a much needed bonus point to move them four points clear at the top of the league.

Insult to injury would be added almost instantly by Kingston when Venables dove over the line for the final unconverted try of the game to make it 27-0 and begin the celebrations.

Findlay said: “Victroria [Rustadbakken] was great in the second row. She is one of those players that is not going to be scoring your tries but she works for 80 minutes every time she is out. Mina [Lundevaag] had come back into the team today and some of her kicking was brilliant, same with Niamh.

“The way that they have improved has been the main thing and, not only have they improved as players, a lot of them have got friendships now that will last forever.

“Some of them are talking about living with each other next year. I think that closeness between them has allowed them to win the league – if they do, I do not want to jinx it.”

The Cougars have done all they can now, after handing Roehampton their first defeat of the season, and hope that the second and third placed sides – Roehampton and Kent – do not topple them with their games in hand.