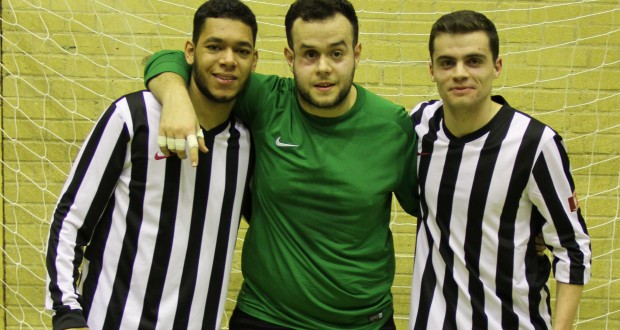 Written by Christine Younan on February 13 2016

The founders of futsal, the sport which led to football, are thrilled for their first appearance at varsity just a few months after its launch at Kingston University.

KU students Ruben Pinto, Youssef El Hana and Josh Emmanuel created the club in September and are aiming to raise awareness at this year’s varsity against the University of Surrey.

Pinto, a second year sports analysis and coaching student, said: “I love playing but I really like futsal and being able to play in one of the most prestigious competitions between universities is a feeling I cannot even describe.”

The Union of Kingston Students currently does not allow futsal to be a Union member because of the high number of sports it already offers to its students.

Futsal will play under the British Universities and Colleges Sport (BUCS) League this year after receiving funding from Sport England in October.

Pinto wishes that more students were encouraged to play futsal at university.

“I hope that after varsity people will be aware that futsal exists and that it is different from the traditional five-a-side played in the UK,” he said.

Varsity is Kingston’s biggest sporting event of the year and will take place on March 9 at Surrey Sports Park.

Youssef El Hana, a third year biomedical science student and president of the basketball team, said: “If we are in varsity we are technically Cougars. I see us as Cougars and I see that it will be the first step of us being Cougars after varsity.”

Futsal is the origin of football and all the big names within the sport, such as Ronaldinho and Neymar, started out playing futsal before becoming professional football players.

The sport which is played indoors is like five-a-side football but has different rules. It has kick-ins instead of throw-ins.

The founders of the KU futsal team are hoping that after varsity, the team will join the BUCS League. They hope that joining the League later on in the year will drive more students to participate in futsal.

“Once we put ourselves on the map at Kingston University, we can grow more as a sport and then we can invite women to play as well. I’m sure that a lot of women would play futsal,” said El Hana.

Students at Kingston University are usually sucked into playing the most prominent sports which are rugby or football.

Football is a bigger sport at KU, with over 450 students trying out for the team.

Tickets for varsity are now on sale at Penrhyn Road SU Reception. Prices range from £12-£15.