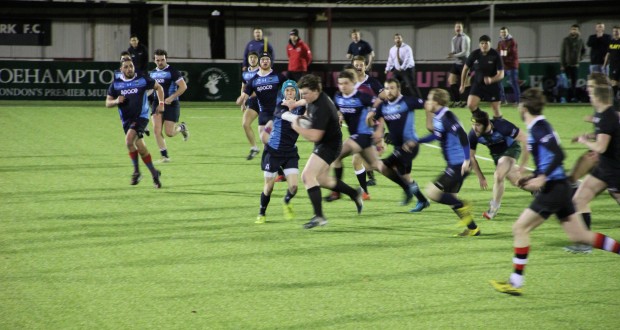 Written by Christine Younan on February 22 2016

The Cougars had to beat their rivals by 17 points in order to be promoted from the South Eastern 4A League to League 3 under the British Universities and Colleges Sport League.

Babbadora “Babs” da Explora said: “We knew it would be a tough game, our scrums have been slacking but they are an improvement. Our boys have put 100 per cent effort tonight.”

Kingston were forced to reschedule their first encounter with Roehampton earlier this year when the game was called off due to icy weather conditions at Kingston’s home ground, Tolworth.

The BUCS fixtures are usually scheduled for Wednesday afternoons but due to Kingston’s busy schedule, they were unable to play at their usual time with the semi-finals and varsity on the way.

Kingston created many opportunities for themselves at Rosslyn Park, Daniel Wilkinson had many runs for the Cougars and successfully scored all of their conversion tries.

Joe McAllister said: “They were a lot bigger than us, that’s how we lost the game. We had to win by 17 points, so it would either go for that or nothing.”

The Cougars put themselves in a comfortable lead when James Mckechnie made a good 30 yard run through Roehamapton’s defence which put Kingston with a 21-17 lead with 5 minutes left.

Gareth Soper came off for 10 minutes after the referee gave him a yellow card for a professional foul against his opposition.

Soper said: “We have too many good coaches now so our performance has improved, personally I feel that we should have put a lot more effort in the first half.”

Rosslyn Park RFC had a high attendance of supporters, the Kingston University supporters were cheering for the Cougars, “We love you Kingston, we do!”

The game remained 17-16 to Roehampton for the first 20 minutes of the second half which looked to be a goalless half.

The Cougars played with great speed, Milo Brown ran a few yards down the line in attempt to score a try for Kingston.

Kingston looked prepared for this game, they trained hard for it and they put a lot of good effort so their loss made no difference to their position on the table as they remain in second place after Roehampton in first.

The game saw a good defence line by the Cougars as they avoided any chances that Roehampton could have had for a try.