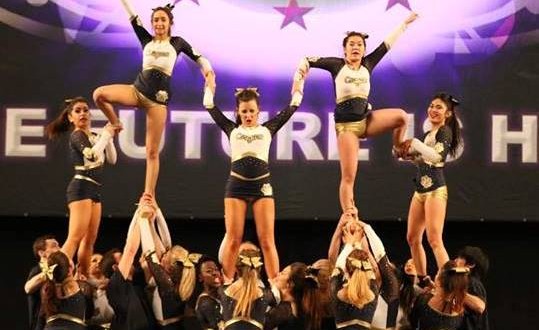 Written by Christine Younan on March 11 2016

Kingston University’s Cheerleading team won the Future Cheer University nationals in Birmingham, making them National Champions for the third year in a row earlier this month.

Future Cheer is the top cheerleading organisation in the UK for competitions. The Cougars are made up of two full teams – Level 1 Co-ed Blues and Level 3 Co-ed Golds.

Isobelle Daler-Finch, vice president and third year drama and dance student, said: “For me what is so important about this trophy is that it’s the first time for both teams to win nationals.

“I have been pushing both teams in practice so we could reach that goal.”

The cheerleading squad consists of 45 people for both teams, the Blues and Golds. The Blues competed against five other university teams who they beat at nationals in Birmingham and the Golds beat six other teams.

Emma Haggis, coach for Surrey Starlets, an All Star Team was awarded ‘Coach of the Year’.

Hollie Waters, president and third year dance student, said: “It feels amazing to have received those awards and as a cheer team we were all over the moon.

“We had worked so hard throughout the year and we felt that cheer was finally being represented as a sport through the university,” said Waters.

The cheerleading committee will undergo team changes for the next academic year due to current members graduating.

“I will be extremely sad to leave the team behind once I have graduated because being a part of cheer has most definitely been one of the best highlights of university, and I would encourage everyone at university to join a sports team,” said Waters.

Daler-Finch said: “I honestly believe that the team will be left in good hands as everyone who joins the team is so dedicated and talented.”

Cheerleading is an expensive sport that requires a lot of funding and the team have set up several fundraisers to support their training until July.

“This year, we have managed to cut the costs for cheer by booking coaches in advance,” said Waters.