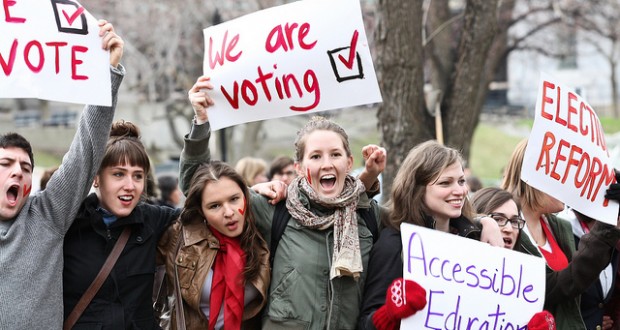 Students, it’s time to take control of your future and vote in the EU referendum

Both Euro enthusiasts and sceptics have urged KU students to take their future into own hands by taking a stand and voting in the referendum this summer.

Around 800,000 people have dropped off the electoral register nationally since a new system of individual sign-ups – designed to stop the growing problem of electoral fraud – came into effect in 2014.

Leave and remain campaigners told The River that students need to get involved and help get friends and family to think about the referendum.

Tory MP, former Cabinet Minister and Vote Leave member Owen Paterson said: “This is an incredibly important debate for you students because you are the future of our country.

“This is the most important decision this country has had to make, it is going to decide what sort of country this is and who runs it.”

The referendum has been labelled the vote of the generation as the last time Britain voted on the issue of the EU was in 1975.

The River survey indicated that young voters are particularly keen to remain in the EU with 80 per cent of Kingston students wanting to remain. Nationally, 63 per cent of those aged 18-29 want to remain. Polls suggest that 56 per cent of Britons aged over 60 want to leave the EU.

Some 95 per cent of over-65s are on the electoral register, giving the ‘Out’ campaign a head start, as older people are more likely to vote.

“This is the decision of your generation, your vote counts exactly as much as anyone else’s. It is your future at stake so make sure your voice is heard.”

Previously, one person in every household was responsible for registering everyone at the address but under the Individual Electoral Registration (IER), each person is now required to register to vote individually.

But because students often move every year, many have failed to register to vote, and the number of students on the electoral roll has decreased since the IER came into effect in 2014.

Lucas said: “The Government has made it much harder by introducing individual registration, which means students probably aren’t registered.
“Young people are likely to be pro-EU but also less likely to vote and it really matters that we do get our vote.”

UKIP student officer Thomas Collins said: “It’s a good chance for you to have a say about your future and whether you want a European Union or not. I would encourage you all to register to vote.”
NUS president Megan Dunn said that June was a “horrible time for a referendum” and students should make sure they are registered to vote and consider a postal vote if “you will be at Glastonbury Festival”.

The festival is attended by around 175,000 people and is the world’s largest music and performing arts festival, taking place between 22 and 26 June 2016, overlapping with the referendum.
Head of Students for Europe, Clifford Fleming said: “We can live in a future that is diverse, that’s open to other nations and where we collaborate with other people in the best way we can.”