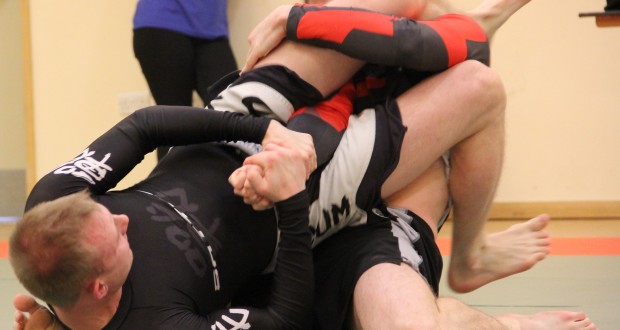 Kingston University dominated Surrey in a mixed martial arts tournament at varsity, defeating them by a score of 12-3 at the Surrey Sports Park, Guildford.

Victories for Ahmad Dabche and Nick Finta were the standout performances of the afternoon – with Finta overcoming his opponent in a rapid fashion, within 30 seconds, with an armbar.

Finta said: “I got the takedown early when I managed to sweep him over. His arm popped up coincidentally but I managed to utilise what was given to me and finish it. I’m pretty chuffed. I don’t think I could’ve planned it better.

“I won a match once in about 13 seconds but I’m not too sure how long that one was.”

But it was not all swings and roundabouts for Kingston.

Jiu-jitsuka Ahmad Dabche went on to criticise the university despite the victory.

He said: “We are currently national champions and we are expecting a lot of support from the university.

“Funding is not great. We need more support. We had to fund ourselves for some of nationals – it should not be like this. We are now the UK champions so we expect to get good funds and support. We should at least get permanent mats.

“Publicity is key to get more people involved. Not many people know that we won 13 golds at nationals – I think that is the best result Kingston has ever had.”

Dabche was, however, full of praise for the event and the performance of his fellow jiu-jitsuka.

“For Kingston, this is a victory. This is a big event between our university and Surrey. I am extremely happy with the win.

“It has been a really nice atmosphere, everybody enjoyed it and I encourage people to join us in all sports, not just jiu-jitsu,” he said.

Dabche did not have a comfortable outing, despite victory, winning with a late takedown close to the end of the time limit.

He was troubled by an injured hand but not use this as an excuse for his performance.

He said: “My opponent is a black belt in judo, he is a very competitive person and really strong.

“The last time I did judo was about 10 years ago so it was tough, but using my experience, I was able to overcome his strength.

“I did this for my team, who were supporting me, my sensei – who put in all his effort to improve our competitive spirit – and the supporters. It has been an excellent event.”