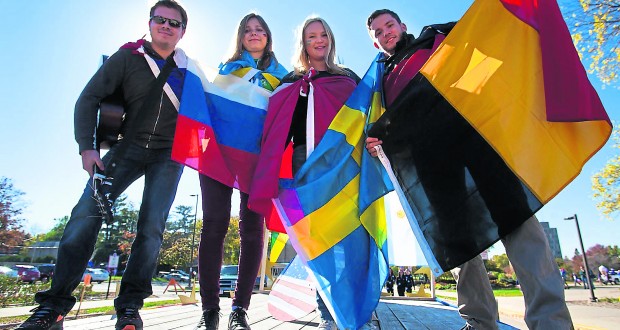 STUDENTS who spend time abroad during their degree are more likely to graduate with top honours and earn more in the workplace, research shows.

It also reveals that richer undergraduates are nearly twice as likely to go overseas as their poorer peers.

The study, published by the UK Higher Education International Unit, examined existing data from students who graduated in 2013/4, including 13,355 UK students who went abroad during their degree programme to study, work or volunteer.

The findings show that more than eight in 10 (81%) of those who spent time overseas achieved either a first or an upper second (2:1) in their degree, compared with 72% of those who stayed at home.

The average salary of a student who spent time abroad six months after gaining their degree was £21,349, compared with £20,519 for a graduate who had not been overseas.

Those who spent time overseas were most likely to be studying French, with others taking subjects including clinical medicine, Spanish, business studies, English, German, politics, other European languages, law and history.

Joshua Tanner, a third year drama student, said he believed studying abroad has boosted his chances of a first: “I really enjoyed studying abroad: every aspect of it was great, and I would definitely recommend it to anyone that is interested,” he said.”

“I do think it helped my grades – it gave me the opportunity to see the American educational system and use their approach to texts on different levels than I had done before. I do think that it will stand me in a good place in the future as I think I’m more employable due to having travelled, studied and worked abroad for a year.”

Unemployment rates were lower among those who went abroad – so-called “mobile students” – across almost all socio-economic backgrounds, the study found, with 5% out of work or due to start a job six months after graduation, compared with 7% of their peers.

Luke Dodridge, a second year graphic communication student, said he thought the experience would help him in the long term: “I completed my second year, then moved to Oslo for 5 months to study at Westerdals School of Communication (Graphic Design).

“I wouldn’t say studying abroad has necessarily helped me gain a higher grade, but in terms of myself, and who I am, it definitely has helped me grow as a person. I think it definitely sets you apart from somebody that has only studied at one university, and I think it lends itself to showing that you may be a potentially more rounded person. It just adds diversity and another element to you as a potential employee.”

France was the most popular destination for students, with a fifth (20.8%) of those who went abroad choosing this country, followed by Spain (15.3%) and the United States (10.5%).