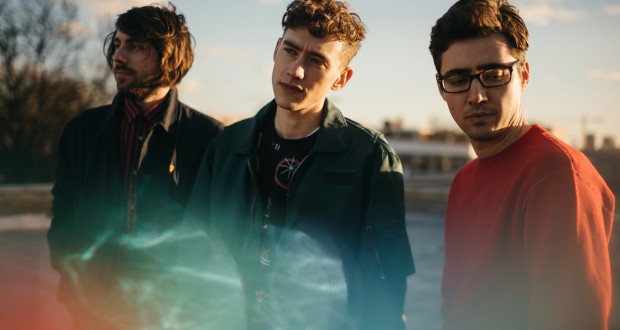 Years and Years of success

FROM an unknown, indie-signed synth-pop trio to four-time Brit Award nominees in just one year, Years and Years have skyrocketed their way to pop stardom.

Consisting of bassist Mikey Goldsworthy, keyboard player Emre Turkmen and vocalist Olly Alexander, the trio have already had a number one album, won BBC’s Sound of 2015, and have a show at the 12,500-capacity Wembley Arena rapidly approaching.

Their rise to success has been astronomical, particularly for Goldsworthy. “When we started out I was still a waiter working in restaurants, so once the BBC Sound Poll happened everything changed, but I did have a moment like that when we were playing the Jingle Bell Ball at the end of the year,” he says.

“Coldplay had gone on and then Little Mix and we had to wait behind this curtain before going on. When it went up and I just saw all these people filling the O2 Arena and I was like “Oh God, what have we done?”

The band formed when Goldsworthy, who had met Turkmen online and started “faffing around making music,” moved to London, where he met Alexander at a party.

“We were all in London at the time, Olly was acting, I was working in a restaurant and Emre was an architect. We just started rehearsing together and it took off from there.”

Things weren’t always so easy for the band. In 2013, they set themselves an ultimatum: it was all or nothing. With a song called ‘Real’ written and ready to go, they intended to throw everything and more at this release to determine their creative destiny.

“We were running out of money,” says Alexander. We needed to see if this could ever work. We had one more EP with Kitsuné and we wanted to try and blow everyone’s minds. We spoke to different producers, pulled in favours, worked hard and just went for it.”

Real deservedly exploded, receiving over one million plays on Youtube and Soundcloud, earning the band shows in Japan and drawing the attention of Polydor, who quickly signed them to a lucrative record deal.

Since that first taste of success, the band have gone from strength to strength. Their debut album, Communion, was released to much critical acclaim last year, smashing its way into the charts at number one, and outselling the rest of the top five combined.

It has now sold more than a million copies worldwide, been certified platinum in the UK, and became the fastest-selling debut in 2015 from a UK signed band.

Citing Flying Lotus, Diplo, Radiohead and Jai Paul as their core influences, Years and Years’ unique sound has captured the attention of fans and critics alike.

Most tracks begin with Alexander at the piano, before being forged into their final woozy, electronic indie form, offsetting his impassioned vocals with hard and hypnotic rhythm.

Alexander has recently become an LGBT rights spokesman, having been vocal about the use of male pronouns in songs, and encouraging fans to be more open about their sexuality.

With PR hush-ups of rising pop stars and actors’ sexualities still very much a feature of the industry, Alexander has been a modest and unassuming exception to the dated notion that “gay people can’t sell records.”

The band’s forthcoming UK tour has been hugely hyped, following their last entirely sold-out run of dates. They plan to step things up this time round. “We’re going to try out some new songs,” says Goldsworthy. “We’re going to start getting the production together soon and hope to beat the Brixton Academy show, which is going to be difficult.”

With the rest of 2016 being packed with live shows, it is unlikely that the band’s second album will be out this year, but they plan to start work once they’re off the road. “After touring we’ll
probably take some time to start writing,” he says. “We don’t really write on the road, it’s definitely a separate thing.

“We are going to tour with Ellie Goulding in America, which will be crazy and festivals are starting to get worked out too. We are doing Coachella, which will be great, definitely hot.”