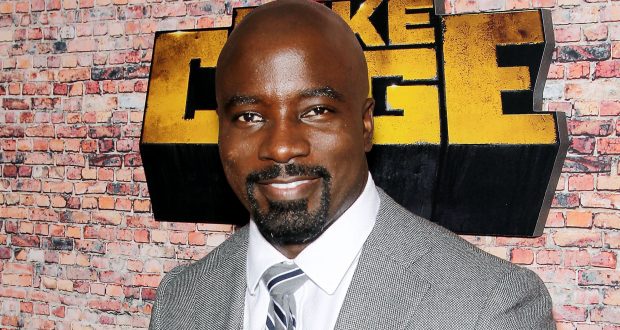 Written by Johanna Christoph on October 11 2016

Luke Cage first appeared in a Marvel graphic novel in 1972, called Luke Cage: Hero for Hire. Luke Cage, aka Carl Lucas, was wrongly accused and put into prison where he unwillingly gained superhuman powers in an experiment for cellular regeneration. His skin is unbreakable and he has superhuman strength.

After Daredevil and Jessica Jones, Luke Cage is the third instalment for Marvel’s extended TV universe, and just like its forerunners, it is dark, violent and sexual in tone and graphic and thus rated R for a reason.

In the 13-episode series aired on Netflix, the plot is moved from Daredevil’s and Jessica Jones’s shifty Hell’s Kitchen into a grungy, crime-shaken New York/Harlem in 2016.

Luke Cage, played by Mike Colter, is an ex-prisoner working two jobs to keep his head above water in Harlem. Henry “Pop” Hunter (Frankie Faison), the compassionate father-like owner of the barber shop where Cage works is deadly injured in a shooting in his own shop and the events start toppling over from there.

Villain Cornell “Cottonmouth” Stokes (Mahershala Ali) is a suave, charismatic gangster-boss and owner of the nightclub Harlem’s Paradise. He build his fortune on deception, lies and blackmail together with his sister Mariah Dillard, local politican who wants to bring Harlem back on its feet.

After the shootout in Pop’s Barbershop, the shop is about to get closed due to financial issues. Luke tries to prevent that and to negotiate with gangster boss Cottonmouth. Cottonmouth however has his own financial troubles and starts to pressure the people of Harlem into transferring money into his sister Dillard’s account. The situation in Harlem grows more acute. Luke openly embarrasses Cottonmouth at Pop’s funeral. NYPD detective Mercedes “Misty” Knight (Simone Missick) warns Luke that a war against Cottonmouth could destroy all of Harlem. But Harlem needs to be saved.

Marvel’s Luke Cage is perhaps the best of the Marvel small screen adaptions yet. Already Daredevil and Jessica Jones were exceptional in their action-packed, dark action-drama. Luke Cage tops them with its enticing mix of nostalgic hip-hop and culture references, film noir crime and the bold, cool and raw protagonist Cage.

Mike Colter is brilliant in playing Luke Cage and Misty Knight soon after her introduction becomes a show-favourite as she is able to play the many characters and dynamics of Harlem perfectly and effortlessly.

Cottonmouth is a villain similar to Daredevil’s Kingpin and Jessica Jones’s Kilgrave. Like the vast majority of the show his motives are morally in a greyish zone, there are times when he is cruel, cold and calculating and then he’s passionate, empathic again and cries tears of grief. He’s a highly interesting villain, as all of them are in Marvel’s TV universe.

One doesn’t have to watch the other Marvel series in order to fully enjoy Luke Cage. The show is able to stand entirely on its own, however for fans of the shows will see lots of connecting details that tie the shows together cleverly.

Luke Cage is entertaining and draws people right into this dark array of superhero drama and human tragedy. But where the plot is unpredictable and capturing, the pacing is fairly similar to shows of the same genre. The pilot has all the right ingredients for a popular adult-oriented TV show: violence, sex and crime accompanied by a brilliant soundtrack.

Since the season only has 13 episodes, the plot is dense in storytelling, but fails to keep the suspense up the entire time. There are lengthy parts, where one wonders when the plot will finally move on. However, the few rather boring parts get immediately trumped by surprising plot twists and new dramatic changes of situation and it makes one eager to keep watching.

Luke Cage is a great new instalment for Marvel’s extended TV universe and well worth the wait. The dark, psychological series with its brilliant cast and soundtrack manages to even surpass Daredevil and Jessica Jones. It will be hard for Marvel’s next and final instalment, Iron Fist, to top Luke Cage.