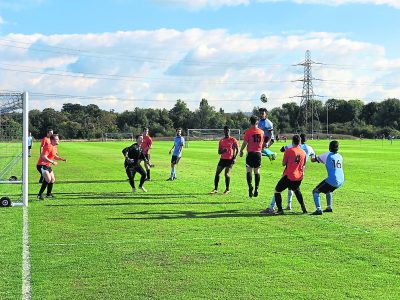 Written by Laurence Bohan on October 14 2016

The Kingston Men’s first team made a solid but unspectacular start to the new football season on Wednesday with a narrow 1-0 win over Chichester University’s fifth team.

The Cougars were made to wait until the 60th minute of the second half to get the winning goal with striker Mo Sesay tapping in from close range.

“I am absolutely delighted we got the win because last year it was a similar game to this but we ended up losing,” said captain, Sam Pledger.

“We have improved the team massively and we would not have won that game last year. I am really pleased,” he added.

KU left the field disappointed at halftime having not been able to break the deadlock despite dominating the possession and creating numerous chances.

Lone forward Sesay, rattled the crossbar on two occasions in the first half when it looked easier to score, while midfielder, Pledger, struck the bar after an audacious attempt at goal directly from the corner.

“It was getting to like 60 minutes at 0-0 and I thought how the hell have we got to an hour and not scored. I was getting desperate, shooting from absolutely anywhere,” said Pledger.

Pledger acknowledged the teams’ misfortune not to finish the half in front and told his team at halftime that they had been unlucky, telling them that they did not want to regret not being able to turn their chances into goals come the 80th minute.

The captain also demanded the team get the ball to t left winger Hadhi Habboushi more often and the team did just that as some good play down the left led to a good chance on the edge of the area for Reece Carter-Allen who scuffed his shot wide.

While not creating quite as much as they did first half, KU were still on top second half and it some good play down the left that led to the open, left back Jayden Pott’s overlapping run and pull back setting up Sesay for the easy finish.

“I just saw Jayden running on the wing, so I made sure I was in the box so that when it fell to me I could just control it in the net,” said a delighted Sesay.

“I wasn’t too down about not scoring first half, I knew the chance would eventually fall to me and I just wanted to make sure I was ready when it came,” he added.

KU will be happy to get the three points having been frustrated for much of the game and will also take pride in their clean sheet.

The Cougars kept only one clean sheet in each of their last two campaigns in the BUCS South Eastern 4C League and will be hoping for more of the same in order to finally lift themselves out of a division which they have been stuck in for three years.

“Teams like this we should be absolutely destroying; we made this really hard for ourselves. But I thought the team played well,” concluded Pledger.

The team will aim to make it two wins out of two when they travel to London School of Economics next Wednesday.