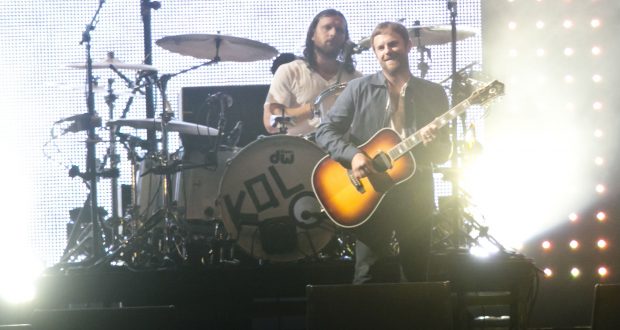 Kings of Leon’s comeback lives up to the expectation

Written by Johanna Christoph on October 14 2016

Kings of Leon inspire a chill road trip in their seventh studio album “WALLS”. The American band delivers their iconic alternative stadium rock the fans have grown to love since the band’s release of their first studio album “Youth & Young Manhood” in 2003.

It’s been three years since the last album “Mechanical Bulls”. Compared to the forerunner, “WALLS” is more laid back in its sound, and it has a generally lighter, but also more mature tone.

While listening to the album one immediately recognises the unique Kings of Leon sound of soft guitar riffs and energetic drums together with the recognisable voice of frontman Caleb Followill.

However, unlike “Mechanical Bulls” which had a balance of edgier, sarcastic sounds and lighter ones, “WALLS” has a much happier, more relaxed sound that makes listening to the album overall enjoyable.

Although the majority of the songs are held in a lighter, relaxing sound, the song Waste A Moment reminds one especially at the start TO one of the band’s greatest hits, Sex on Fire. It has the edgier sound, with the music building up exponentially to the chorus. However the song cannot reach the brilliance of one of Kings of Leon’s most popular songs that appeared 2008 on their fourth studio album “Only by the Night”.

The song Find Me also reminds one greatly of Sex on Fire with its harder sound and slow build up to an exploding chorus of powerful guitar riffs and hard drums.

The song Over has a powerful, sweeping beginning culminating in an anthem-like song carried heavily by the vocals of frontman Followill and it finishes energetically and overwhelming, and could very well be used as a movie soundtrack because the song is just able to invoke so many hopeful emotions while listening to it.

Around the World is a true feel-good hipster-song that immediately paints a sunny beach, sun glasses and lots of love and flirtations into the minds of the audience. The lyrics of the chorus tell it all: “All around the world/ and around the world/I lost myself/and I found a girl”.

All in all, “WALLS” of Kings of Leon is an entertaining new album that delivers the sound we know from the band without being too experimental. They manage to make an agreeable mix of powerful alternative rock songs and rock ballads with quieter sounds.

Fans of Kings of Leon will be pleased with the new album, however may grow bored after hearing the half of it, because while the band delivers its iconic sounds it has failed to mature all that noticeably from their fourth album and have yet to deliver again a title as brilliant as Sex on Fire and Use Somebody.