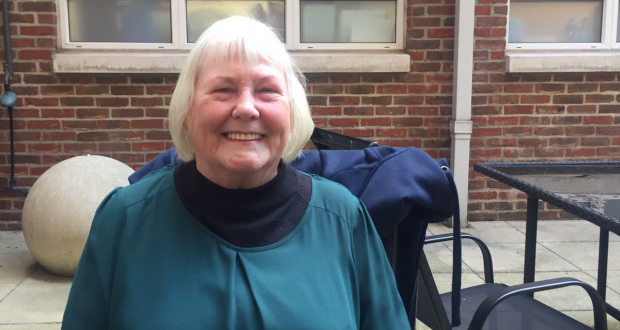 Hilary Chalkly during her third week at KU

One of the UK’s oldest students enrols at KU

Written by Amelia Cunningham on October 17 2016

An 80-year-old creative writing student who left school at 15 has proved her childhood doctors wrong after starting her MA at KU.

Grandmother Hilary Chalkly suffered with rheumatic fever as a child, which caused her to miss parts of her education in her younger years, but has shown it is never too late to pursue an education.

Chalkly, a resident of Berkhamsted in Hertfordshire, said: “Before the age of 15 I was ill and that sort of leaves a weakness in you, but I’m now thumbing my nose at all the doctors, although I still have a long way.”

Chalkly, who was unable to partake in any physical activities or even homework during her schooling years, enrolled in a part-time creative writing MA this term and is “thrilled to bits” with the course.
“Being able to walk through the university knowing I am a student is a very good feeling.”

Not like when I have been with my granddaughter when she was going to a uni to look around. I feel like I belong here and I am a student,” said Chalkly.

Chalkly, an ex-owner of a country and western music nightclub in Wimbledon, has been immersed in creative writing for the last six years.

She has already written one book containing eight short stories called ‘Escapades of Love’, but intends to edit and develop the book once she has completed the course.

Adam Baron, Director of Studies for the MA in Creative Writing, said: “We are really happy to have Hilary here. While she may be the oldest student so far, we welcome a diverse student population to Kingston each year.”

Chalkly said she has always loved to read and write but said it was her daughters that finally persuaded her to enrol.

“We were just sitting down at the kitchen table, drinking a cup of coffee and my daughters shoved me into it,” said Chalkly.

“My daughters and my husband are very supportive. I think my husband is also relieved he doesn’t have to read through every single thing I write now,” she added.

The mother of three is the eldest student in the university but said that she does not find it daunting and is certain that it’s “what’s in your head that matters”.

“When I first came in, I thought, I am not going to do this, I saw all these young people flying around and I thought well I am one of you, and then it just all slotted in place,” said Chalkly.

“Last Friday, when I was listening to our lecturer, I knew I was in the right place,” she added.

Although Chalkly is committed to pursuing her MA course, she feels that the country needs to do more to get older people into further education.

“I want the government to see that once you have retired, you do not have to sit in your chair and watch television, there is a life there, go and get it. It’s our right,” said Chalkly.

“Because I am past 60 there is nothing I can do. We’ve written to our local MP about this, because it’s ageist. It’s illegal surely, to say that you are over 60 and you can’t get funding,” said Chalkly.

Despite this, Chalkly confirms the costs will not put her off her studies at KU.

Chalkly said: “I attend to see this through the whole lot, and then I am going to be out there with my books. I want to inspire others and appear at different talks and tell people ‘please, your mum doesn’t have to give up.’”