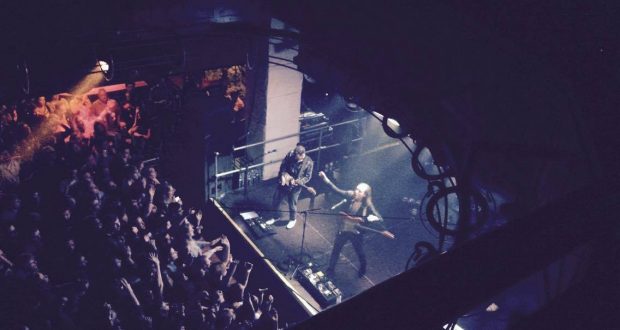 Written by Camilla Iversen on October 27 2016

The crowd, consisting of mostly young adults, went wild when the band took to the stage, starting off with some popular classics from the 2010 album “Tourist History” – ‘Cigarettes in the theatre’ and ‘Undercover Martyn’.

Afterwards the band introduced some of their newest hits from their new album released on October 14: ‘Ordinary’, ‘Are we ready? (Wreck)’ and ‘Bad decisions’  which received a positive response from a lively audience.

This is the third album released by the indie/rock band from Northern Ireland, after taking a three year break from their last album “Beacon”, released in 2012.

What separates the newest album from the other two is that it seems to be missing a lot of the happy upbeat tones that have defined their previous music which makes the songs difficult to distinguish between.

Even though there are some songs from the new album like ‘Bad Decisions’ and ‘Je Viens de la’, that has an electro pop vibe to it, it is quite disappointing that something that separated Two Door Cinema Club from other artists like The Wombats and The Naked and Famous is missing.

But the band wiped every doubt away when they ended the evening with three of their most popular songs throughout their nine-year career: ‘Sun’, ‘I can talk’ and all time favourite– ‘What you know’, in one big sing along.

Even though New Slang’s big headliner did not completely sell out, Two Door Cinema Club, Banquet Records and New Slang gave us a new night to remember, that brought up memories of what it was like to be a teenager again.