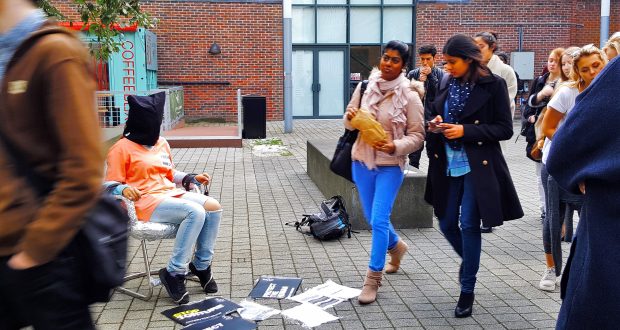 What would you choose for your last meal?

Written by Chanelle Field on November 3 2016

Students were given more than food for thought as an execution was re-enacted at Penrhyn Road by the Amnesty International society on October 10.

“We are here today to raise awareness that the death penalty still exists throughout the world and to take part in the 14th World Day Against the death penalty,” said Amnesty International society treasurer, Yasemin Gava.

“Since 1973, 150 US prisoners sent to death row have later been exonerated for reasons such as witness misidentification, racial prejudice in the judiciary or false confessions. Some of these people as we will see in a series of short films tonight called One For Ten have been held in prison for 18 years or more.”

Students were stunned when Gava was solemnly led to an electric chair in the packed John Galsworthy courtyard at lunchtime wearing an orange prison shirt with a prisoner identification number and a black hood over her head. She sat in the chair in silence until students asked that she be shown mercy and ‘released’.

Amnesty International have campaigned heavily against the death penalty since 1977 on the grounds that is a denial of human rights and breaches both the right to life and the right to live free from torture, which is enshrined in the Universal Declaration of Human Rights. They argue that many judiciary systems are flawed with sentences being given without fair trials and that there is always the risk that an innocent person could be sent to their death.

Mark Redfern, a history and journalism student, said: “I enjoyed the electric chair in the courtyard. It was very striking.”

“You could be walking through the courtyard and not paying attention and you see a woman in an orange jumpsuit with a bag over her head, sitting in a mock-up electric chair. It is not something that you often see. Although of course this is what is happening around the world and this really brought it home to you.” 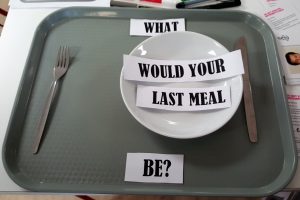 Students in the canteen at Penrhyn Road were given examples of a handful of requests prisoners on death row had made for their last meal prior to execution. These ranged from Cheese Doodles and Coke, a packet of crisps, and very simply a single olive. Students were asked to consider what their requests would be, which were considerably more than the displayed examples.

The society finished up the day in the Clattern lecture theatre with a screening of One For Ten, a series of films produced in 2013 interviewing ten individuals from the US who had been released from death row, which illustrated Amnesty’s argument that even in developed countries there is substantial risk for wrongful conviction.

The Amnesty International society will be holding their next event Raise for Refugees on November 11 at 7pm at the Knights Park Student Union bar. The society have organised for Kingston University students to perform a short play and there will be live music. The £3 entry fee will raise money for Amnesty International’s campaign for refugees.