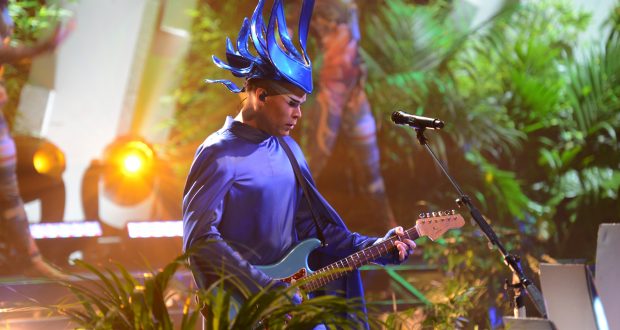 Editorial Use Only / Consent for book publication must be agreed with Rex Features before use Mandatory Credit: Photo by REX/Shutterstock (6248077c)

Written by Johanna Christoph on November 16 2016

Empire of the Sun delivers effortless electronic pop and cheery synth in their third studio album, ‘Two Vines’, which was released Friday October 28.

The Australian duo, formed of Luke Steels and Nick Littlemore, was founded in 2007 and ties smoothly into their established otherworldly sound of the forerunner album ‘Ice on the Dune’, which appeared three years ago. ‘Two Vines’ shows a great balance of softer, slower songs and up-tempo tunes suited for the dance floor.

‘Two Vines’ also features contributions by Henry Hey and Tim Lefebvre, two musicians who worked with the late David Bowie, among others.

Recognisable through the album is the duo’s effort to entertain the audience whilst staying true to their sound and not becoming boring or repetitive. Only one song does remind one quite of one of the Empire of the Sun’s most popular songs, ‘We Are The People’, which was number 14 in the UK single charts.

The song ‘High and Low’ is in its composition relatively similar to the 2009 hit. It is a fun, upbeat song with epic synths.

‘To Her Door‘ delivers an epic feel-good song which transitions from a synth-pop ballad to an upbeat tune. The lyrics in the chorus, “I feel better when we are together/ I know it’s simple but I don’t care”, sung by Steele in his usual airy way sum it up pretty well.

With ‘Ride‘, Empire of the Sun delivers an up-tempo song with strong electronic pulses, that immediately starts off as a dance floor tune and the hard beat stands in such a contrast with the falsetto vocals and makes it a memorable tune.

Empire of the Sun’s new album is a great balance between dance floor synth pop and euphoric melodies that manages to capture the audience from the first song and stays fun and enjoyable till the end.