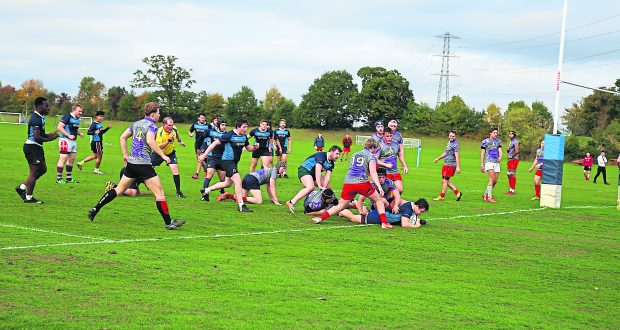 Adam Nillson touches over for the first of his two tries for KU Photo: Iúri Cordas

Written by Laurence Bohan on October 31 2016

A late comeback from the men’s rugby first team proved not enough to take home the three points at Tolworth on Wednesday as KU lost 31-27 to Reading University’s third team.

After trailing by 21 points at the interval, forward Adam Nillson’s brace of second half tries threatened an unlikely win for the Cougars but the home side were unable to find a late winner.

The loss was the second in succession for the struggling Cougars, who right now seem unable to play at their best level for the full 90 minutes.

Coach Dean Hartry said: I’m frustrated and disappointed really. We’ve had a serious talk and if the guys want to win the league they will need to get the basics right and do a lot better than this.”

The team struggled in the first half to retain possession while giving away numerous penalties to Reading whose kicker did not miss a single strike at goal all half.

Hartry said: “We didn’t have the ball except for when we were giving it away. These were the worst errors I have seen from them, basic errors with dropping the ball.

“We weren’t finding our touchline and were just not doing the basics really.”

KU recovered from the early set back and took the lead mid-way through the half when a fumble from a Reading back allowed Muhammed the simplest of tries, bundling the ball over without much resistance.

The lead lasted less than one minute after Kingston repaid Reading the favour as a dropped catch gifted Reading an easy five points.

The game soon swung back in KU’s direction as their decision to opt for a scrum inside the 22 metre line resulted in Mackie touching over.

Full-back Nitesh Gurang, who struggled with his kicking all day, missed with the conversation.

KU capitulated with 15 minutes left in the half, letting in two tries in the space of two minutes before conceding again on the half time whistle.

In the break Hartry told his team they were not out of the game, telling them: “You can fix this guys, I know you can.”

15 minutes into the half KU started their comeback from a 21 point deficit as Nilsson scored his first of the game after what was the team’s best move.

The forward was on the score sheet again soon after as he got on the end of a long cross field pass and went on an open run for the posts before shrugging off a covering reading back to touch over.

“When we got the basics right we started playing some rugby but it was too late. I think even that, no disrespect to reading, three of their tries we just gave them to them,” said Hartry.

“They played for 80 minutes and we played for 15 and that’s what it came down to. Five more minutes in the game and I think we might have won it,” he added.

Kingston’s scrum was one aspect of their game which worked all day and it was through this where Andreas got the try to set up an exciting finish.

Two more missed conversions from Gurang meant Kingston were still more than a single score down but they were on top and had six minutes to complete an impressive comeback.

A horrible clash of heads between a Reading back and a Kingston forward meant the game stopped for a long period as the ambulance was called to the field and the player was taken to hospital.

Both teams showed great sportsmanship here by clapping the player as he was put on a stretcher and taken from the ground.

The stoppage allowed Reading to regroup and it appeared Kingston’s momentum had been slowed down.

The team tried until the final whistle to find the decisive try but came up just short with Bahador Eskandari’s decision to kick the ball instead of keep it hand, thus ending the game, typical of Kingston’s performance and bad decision making at times.