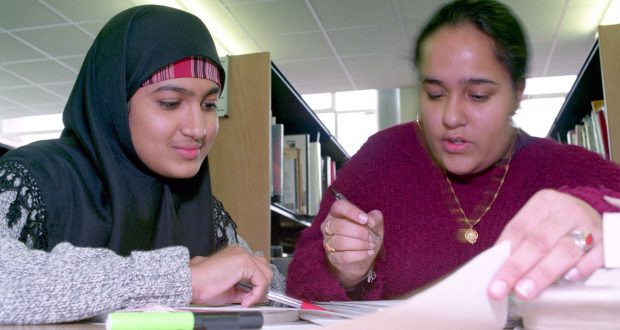 Students in the library Photo by: Photofusion/REX/Shutterstock

Defying traditions with every degree

Breaking the news that I wanted to study journalism at University was far from easy. Growing up, law, medicine and accounting spun in a limited wheel of future prospects that my father found financially stable and a way for his children to become successful. I settled for law which I adored until I reached about 17. Unbeknown to him, it was my father who stirred my love for journalism by consistently supplying me with daily newspapers and magazines for as long as I could remember.

Subconsciously, I think I always knew I wanted to steer towards a journalistic path after reading copious amounts of newspapers and online media negatively discussing my religion. This made me tired of being a consumer and it was not long before I yearned for the opportunity to produce honest work that is not bias, discriminatory and thus able to educate a global audience on what Islam truly is. The daunting prospect of telling my father filled me with anxiety, however the actual revelation was a pleasant surprise.

My father was worried for me and what may come of my future financial status now that I had decided to join such an uncertain profession yet he was also very proud of me for doing something I believed in. It is important to note that this worry I had did not stem from nothingness. Many young Muslims are afraid to stray from ‘traditional’ degrees in the fear they may disappoint their parents. However, many hijabis are removing themselves from the stereotypes that follow and are breaking into ‘uncommon’ degrees.

Today, I am a third year journalism student, one of only two hijabis on my course, and I have no plans to limit my current and future endeavours. Here are the stories of some KU hijabis who have degrees and stories that may surprise you. 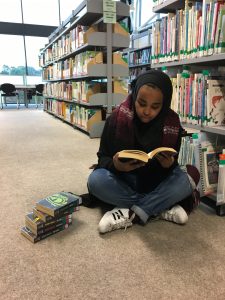 Sofiya Ali, a second year English literature student, understands the strains not having a diverse course can create. Although there are a handful of Muslims on her course, she is the only hijabi which she described as being a bit disheartening. Although she feels the black and minority ethnic on her course are under-represented, she also agrees that people on her course are welcoming.

Ali said: “Everyone on my course is really nice, alhamdullilah (thank God) – you’re not segregated or made to feel any different because students at Kingston are not judgemental or small-minded. I also think my degree helps – English literature involves a lot of discussion and expressing yourself through your writing, and that can’t be done without being personable and being able to talk to everyone.”

Ali originally studied law but decided to pursue English literature, her favourite subject growing up, after having an epiphany of sorts and realising she was not going to do anything with a law degree and that her real passions were elsewhere.

“After my degree, I knew that I wouldn’t have actively pursued a career in law, and I probably would have just let the degree go to waste – law is too hard a subject for it to just be there, unused! English was always my favourite subject at school so it confuses me until this day as to why I didn’t just choose to study that from the beginning,” she explained.

When Ali initially told her parents about switching her course she was met with ‘was it that hard?’. But found it most difficult to tell her father about her decision to switch courses as he was always sort of fixated on the idea of her becoming a lawyer.

Ali revealed that whenever her father would come across friends or other relatives he would start every introduction with ‘she’s going to be a lawyer, you know’ which she found both daunting and intimidating. However, after explaining her abrupt decision to her father, he seemed to understand and support her.

The Literature student spoke of her role models that helped shape her into the woman she is today.

“Both my English and French teachers were my role models in school, always going above and beyond to make sure their students got the best grades possible. I found out after I left secondary school that my French teacher passed away, and she was terminally ill for years, which made me appreciate her that much more because she never disclosed this information and helped us until her last days, when she could have easily have retired,” she recalled. 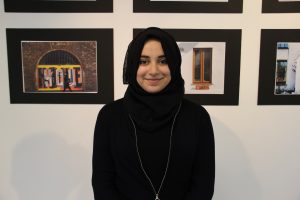 Ali’s wonderful advice for hopeful hijabis that would like to study in her field is to do what they want. “Ignore the cries of “but Ahmed’s daughter is doing medicine and you want to study a language you’re already fluent in” and “go into pharmacy, there’s a lot of money to be made!” At the end of the day you’re the one going to be pulling the all-nighters studying hard, not your parents, so take your future into your hands and study whatever you want. Also, it’s totally okay to change your mind after you start one course. Not everyone gets it right on the first try, and that’s totally fine,” she said.

Sarah Mansour, a first year architecture student, knows all too well the feeling of dread when it comes to telling some Muslim parents their career goals. Mansour explained that when she told her parents and family members about her hopes of branching into the art world, she was met with a frosty reception.

The ambitious student revealed: “When I first told my parents that I wanted to be an architect they argued that it wasn’t a secure job and that this wasn’t something I should be doing. Apparently, everything around Muslim women is about becoming a wife and having kids when this is really not the case. Being an architect isn’t different, it’s simple, it’s just a 9-5 job, what’s the difference between that and being a doctor? It’s exactly the same thing.”

Many more hijabis in the modern era are branching out and joining the art world, Mansour told us of some friends that were worried about being held back. She explained that a lot of Muslim hijabis are fearful that they will be judged for their hijab rather than the talents they possess.

The brooding architect said: “I know of a few that want to do Art or Fine Art but feel as though a few things are holding them back. Firstly, the scarf, secondly, their background, culturally, they’re expected to do something. I think it needs to be known there’s a bit of a leeway now where you can do what you really like doing.”

Unfortunately, Mansour’s sister was not as fortunate and caved in to traditional expectations.

However, strong-willed Mansour had some advice for aspiring artists and said: ” Do whatever the hell you want, don’t let anyone hold you back. I didn’t let anyone hold me back no matter how much my mother told me to be a doctor. Just do whatever you think is right for you to do not what you think is right for you to do for your future or your husband or your kids because right now that’s not what matters. What matters is what you like, not what other people want.”

Mansour’s somewhat smooth transition was not the case for all hijabis.

Bodour Azklany, who graduated last year, found it difficult to adjust after dropping journalism three weeks into her first year opting to pursue film studies instead as she felt it was more her cup of tea.

Azklany’s problem was not with her family who accepted her wholeheartedly, it was the hardships being the only hijabi on her course created, so much so that she isolated herself from others.

The film studies graduate said: “Being the only hijabi in my course, for sure did cause me a lot of problems. I always excluded my self during my lectures, feeling that no one really wanted to interact with me. Because of this I forced myself to work alone when it came to team work and when I was part of a team, it was really just because the lecturer placed us together. I alienated myself, I made myself believe that they were all against me, sometimes I even bunked my lectures because of how much of an outsider I felt.”

This exclusion came about because Alzkany began to feel as though she was being segregated because all other students from cultured backgrounds were fitting in and she was feeling judged. “I gave them the impression that I was afraid, that I was not talkative, and because of this they alienated me,” she said.

Soon enough, Alzkany realised that it was all in her head and that she needed to give her classmates a chance to understand her which led to a smoother journey at university. Her advice to young Muslims thinking of doing film is to be themselves and include themselves if they feel excluded. She also loves the reaction she gets when she tells other hijabis she studies film.

“Whenever I told a fellow hijabi that I studied Film Studies, most of them were shocked, because you didn’t usually find many hijabis getting into that industry. They didn’t judge me; they just didn’t see it coming. I liked it though. I liked shocking people like that. So you could say I got stereotyped in a way,” she said.

Some Muslims have a negative perception of the media after years of stereotyping and oppression so imagine studying media as a degree? For Hansae Belhadj, this is a reality.

Belhadj explained that she is often told she will face criticism for being a hijabi in the public eye or that she will face limitations because of her hijab but she has also met positive people who see her hijab as a plus rather than a con.

Belhadj powerfully explained why being a hijabi is not something that should hold you back from your career: “Many people do see the vision without any obstacles and understand that media is such a powerful tool and that our participation as hijabis is vital in order to shine a new light on our culture and a positive one on our religion. We shouldn’t live up to the stereotype of being restricted because we are a women. No. We are strong, we are smart and with our hijab we are powerful.”

So, being a hijabi might have its difficulties and it may make it easier for people to make presumptions about you, but it is clear that despite all those presumptions and stereotypes, there are Muslim women flourishing. Whether that be KU students or Muslims worldwide: their degrees aren’t the same, their hopes and dreams aren’t the same and they aren’t the same. Individuality is always key.