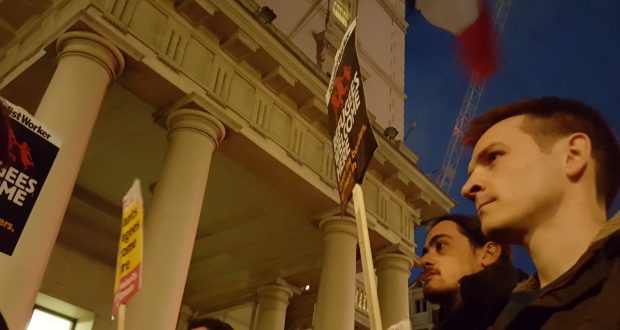 Written by Chanelle Field on November 8 2016

Kingston University students protested against the demolition of the Calais ‘Jungle’ migrant camp outside the French Embassy in Knightsbridge, central London on October 24.

The demonstration was organised by Help4Refugee Children and Stand Up to Racism (SUTR) in response to the French government’s plans to evict the 10,000 migrants living in the camp and the British government’s lack of progress to rehouse vulnerable, unaccompanied child refugees in the UK.

Tristan Ayela, a Queen Mary’s student and spokesman for Student Stand Up To Racism, said: “It was important to come here tonight because we are here to support the plight of the refugees and the fact that we are outside the French Embassy really shows that the average Joes, you and I are the ones that are saying let them in, and it is the politicians who are refusing to hear that.

“It is an absolute tragedy how few child refugees the British government have let into the UK. The figure is somewhere around 200 and it is nowhere near the 3,000 that was promised two weeks ago. The Dubs Amendment forced the government to say they will take the most vulnerable unaccompanied minors, but many who are eligible for assistance and even have family in Britain have been kept waiting now for months.”

Speakers at the demonstration included teachers from the National Union of Teachers (NUT) who had personally taught in the makeshift school within the Calais camp. Michael Holland, a primary year teacher from Lambeth NUT told how he had showed his class pictures of the camp in Calais and asked what would they do if they were a refugee.”

Holland described how all of the children agreed that it was awful and wondered why the refugees could not come here. He said: “They could not understand the logic of a government of one of the wealthiest countries in the world saying that these people who have travelled across Europe from all parts of the world, in the most horrific situations are not allowed into this country.” 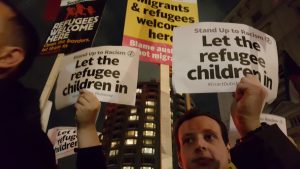 The 150-strong crowd sang the phrase: “Say it loud, say it clear, refugees are welcome here” at various points throughout the demonstration but at times the tone shifted as frustrations spilled out and anti-government rhetoric of “Refugees in, Tories out” and “shame on you” made their way around.

Richard Donnelly, Kingston Ma Critical Theory student said, “It is very important for us and people in this country to be involved in active defiance against what the French government is doing in the Calais camp, which is depriving 10,000 people of a home, but also actions that are actually supported by the British government. I mean all of this is happening because of political pressure by the British and French governments to stop people coming here.

“The British and French states have gone to the Middle East, places like Syria to drop bombs but when the people who are fleeing those bombs come to France and want to come to England the British and French states refuse to give them any form of shelter. However, the solution is not to deport them to other camps in France or disperse them so they have to live in the countryside in the Pas-de-Calais or so they end up living under bridges in Paris. The solution is for them to come here to be with their families or be rehomed into British society.”

The demonstration concluded with candles being lit in memory of those refugees that have lost their lives since leaving conflict zones to travel to find safety. Children’s shoes and teddy bears were also left outside the embassy to send a message to the French government.