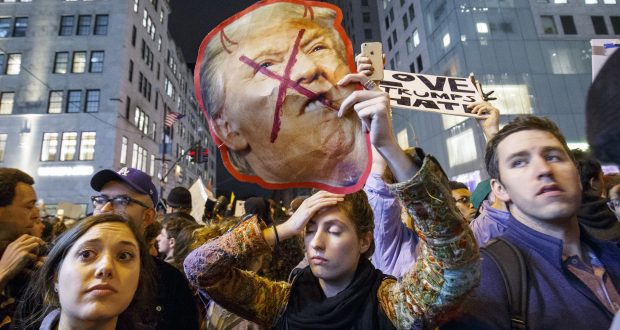 Millenials make me hope for the best after Trump’s election

Written by Alia Alansari on November 26 2016

Sometimes it takes a disaster to unify people, and having a common enemy can be the point when people start supporting each other.

Seeing Donald Trump getting elected for president was a very difficult thing for many people. People around the world, not only in America, sat and watched a TV personality become the most powerful man on Earth.

It felt hopeless for many, but it is pointless to dwell. We reached a point where we now realise that the power lies within the people’s vote. We all fear what might happen in the next four years, but those four years will be over and, in a decade, millennials will be in charge.

The young and educated who did not vote for Trump will eventually overrule. The hateful wave that Trump approached the race with will eventually disappear, and someone else will take over. It is important to remember that it is young people protesting on the US streets, and they will eventually be the ones who get in power.

We cannot forget that Clinton won the popular vote. She has got more Americans on her side than Trump, and they are more vocal than ever. Events like these fuel people with enough anger and passion to take control and not let their country slip away.

Within enough time these voices will grow stronger and louder. No matter what happens, the people who will survive Trump’s reign will stand as a great example to everyone in the world. They are more vocal and educated than any generation before them, and with the transparent world we live in they will get their message across. With the way the votes turned out, people are more dissatisfied with the electoral system and laws regarding presidency. Campaigns have already started in an attempt to change them.

Americans are more determined than ever to change the way things are done, and given how influential the US is, their actions will inform a young generation across the world. This will only be a starting point for a revolution amongst the younger generation, and this should only make us hopeful.

Finally, the sun rose the next day, it was not the end of the world. Earth has survived worse things in its history. I doubt a TV personality will be its downfall.