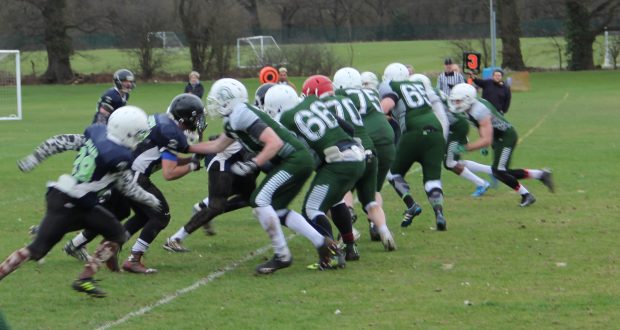 Kingston University Mixed America Football team (MAF) lost 27-14 at home to Swansea University in their last game of A poor season which saw them get relegated from the BUCS Premier South League.

Kingston were only playing for enjoyment, pride and practice, since the team was relegated the week before when they lost 35-18 away to University of Bath.

Finishing bottom of the BUCS Premier South League with just two points, means Kingston will go down and will be playing in BUCS Division One next season.

Captain Ian Darby was frustrated getting relegated but thinks his team will get promoted back up straight away.

“Because I think we’re too good to be playing in Division One.”

Two years ago Kingston got promoted into the Premiership after an undeated season and in their first season in the Premiership, won four games and lost four, and made it to the first round of the play-offs for the National Championships.

This season Kingston lost seven games and only won one, but they were the only team at the university across all the sports, competing in the Premiership, which is the highest division.

Coach Nathaniel Wilson reiterated how tough this league is because it’s the highest division and that its difficult with university teams because players leave every year for graduation, with all the players that were a part of that title winning side, graduating last year.

“I just think we’ve had a tough season across the board. But I think the guys have taken a lot from the season.

“Each year we have a bunch of talented guys that have played for three years. They’re just getting to peak at this level and then they graduate. So it’s something we have to work through. I think we always miss our seniors.”

He was disappointed with the season but highlighted that the American football programme at KU has only been around for a few years.

“I think overall, with the outcome, yes I am disappointed but when we look at the competition, the opposition, the league we’re playing in, I look at Kingston at a programme, a team that within its first five years, made it into the Premiership. That’s unheard of so it’s not necessarily a disappointment.

A team photo at the end of the season.
Photo: Carlos Nobrega

“I think our programme is still very young. I think we just had an unfortunate season this year but it’s something we can build upon next year and it’s only a matter of time until we’re back in the Premiership so all is not lost and I think we’ve got some guys here that are really committed, really up for it next year.”

Players can train with the strength and transitioning coach before the start of the next season to help prepare them.

And like the captain, the coach also thinks the team have what it takes to get promoted next year

Wilson said: “My aims and expectations for next season are to get the guys back, work hard, look at where we’ve come from and work as hard as we can to get the team back into the Premiership.”

Kingston Cougars were suffering a 27-0 deficit by halftime but in the second half, started a little comeback, scoring 14 points.

He said his team gave their all in a tough match and did well in the second half to pull some points back, scoring two touchdowns.

“I think Swansea played a great game. They came out, they have a great programme, respect for them. Our guys tried the best that we could but they outdid us overall in the game.

“In the first half, our guys’ heads weren’t in the game. Talked to them at half time and then they picked it up and they started to play for each other and they did well, to come back.”

Since it was the final game of the season, it was also the last time the third year students played for the team, including Darby, who will greatly miss playing in the side.

He said: “I’ll miss playing but I’m one of the people who are fired up from losing so I’ll most likely even though I’ll graduate, to come back here as a coach so I’m still going to be here to try and help everyone get back to the Prem.”

Darby said: “It wasn’t the greatest send off, especially first half but I suppose making that little, like mini comeback at the end, that like left everyone on a high, feeling that we could do it.”

Another third year leaving the team, also said he wants to come back, but as a supporter.

Sajith Perera, an electrical engineering student, said: “It was one of the best decisions I made joining this team. I learned so much.”