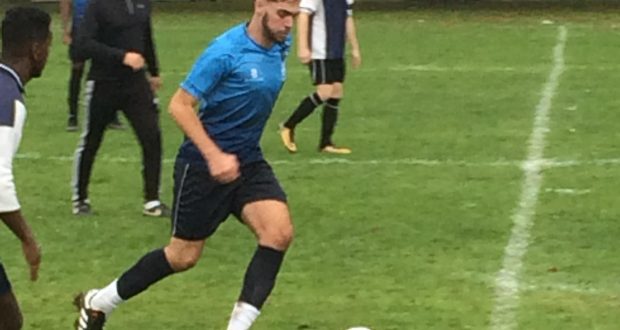 Written by Louie Chandler on October 19 2017

Kingston men’s first team played a friendly away to Chichester’s fourths after the home side failed to arrange a referee for the match on Wednesday afternoon.

Goals from Pranav Thapa and Santi Navarro meant the Cougars bounced back from their disappointing opening day defeat last week with a 2-1 win in today’s hour-long match.

“It was an absolute shambles from Chichester,” KUFC captain Greg Potts said after the match.

“They clearly hadn’t organised the ref and obviously the game couldn’t go ahead as a league match.

“It’s really frustrating to go all that way and not get a competitive game in.”

The game got off to a lightening start with Thapa opening the scoring for Kingston less than a minute into the game.

The left-back cut onto his right-foot and curled an excellent shot from just outside the box, past the desperate dive of the Chichester goalkeeper.

But the Cougars were not in front for long as just a minute later Will Forde fired the home side level.

The midfielder was allowed to carry the ball from half-way before lashing a vicious 25-yard shot past the Kingston Goalkeeper Tom Gurney and into the bottom corner.

The game continued at a rapid tempo and both sides seemed eager to win the prizeless encounter.

Woodwork to the rescue

Mo Sesay was sent through by a brilliant Navarro pass, but the Kingston midfielder couldn’t quite get his feet sorted in time to finish.

Kingston were inches away from re-taking the lead when striker Gurpz Tatla smacked the bar with a thunderous long range strike, leaving the goalkeeper stranded.

The second half started, but it was quickly apparent that Kingston were the only side who wanted to win the match.

One team in it

They had the Chichester side pinned inside their own half for the near entirety of the next half an hour.

Potts played a defence-splitting pass to send Sesay through, but his cross was just too strong for Benjamin Simonsen.

The game then had to be stopped momentarily because of two pitch invaders in the form of a mother and daughter who were blissfully unaware of the ensuing match on their walk home from school.

When the match restarted the impressive Navarro again came close to providing Kingston’s second goal, driving to the byline after a short Sesay free kick only to see his cross glanced wide by Potts at the back post.

But Navarro didn’t have to wait long for a chance of his own.

Collecting the ball on the right hand side of the Chichester box, he checked back onto his stronger left foot and whipped a shot into the far corner on the 47th minute, with the goalkeeper’s fingertips making little difference.

Only one side looked like scoring as Kingston continued to press for a third.

Sesay saw his shot saved after good work from Kelvin Adjei, and Adjei himself should have added a third after a brilliant, jinking run down the left flank, only to dink his shot wide when one on one with the goalkeeper.

“In the end we played very well and we absolutely dominated possession,” Potts said. “We created more chances than last week too and should have scored a hat full.

“Now we just have to prepare for the big cup game next week.”