Kingston University (KU) women’s tennis lost 10-2 to Westminster in the first league match of the season on October 18.

Carpenter lost the first set 6-4 and the second 6-3 however every point was fought for during a match that lasted over an hour and a half. The first set was a close call that saw Westminster pull ahead.

The pair had to switch to a different court halfway through the first set because the net, which should be lower in the middle, was faulty and too high.

The weather conditions were far from optimal due to the rain that kept falling through the match and several KU players fell trying to reach for the ball.

“Conditions were not great today and she [Wigger] was a good opponent. The court was very slippery so it was quite difficult to run,” Carpenter said.

After playing her single Carpenter felt the pain from an old injury in her right arm but after putting ice on it still played the final doubles partnering with Molly Snow and losing 6-4, 7-5.

The second single match was again a very hard-fought battle. Kingston’s Nikki Manipanti lost 6-3, 6-0 against Westminster’s Sabrina Nicoli in a match that lasted over two hours.

Despite the disappointing final score the match was very intense and the two players were always close in points. Manipanti kept going and tried until the very end.

Manipanti said: “You shouldn’t be giving up during the game you should just go for it.”

“I could have done better but to be fair I haven’t been practising that frequently so that makes my backhand really bad you could see that she [Nicoli] was hitting to my backhand all the time.”

Halfway through the second set Bolesteros, who had been playing netball earlier, injured her knee but kept going for two more games before being substituted by Madi Doe.

“Considering it was my first game in a long time I am pretty happy,” said Bolesteros. “I busted my knee playing netball so I shouldn’t have played today.”

Doe said: “Stepping in for the doubles showed how much of a team you need to be and just how different each person hits the ball and it is going to take more than five minutes to adjust.”

Despite the discouraging result the team stays positive for the upcoming season.

“It takes a match to get back in the swing of it,” Doe said.

Kingston University women’s tennis team will play against six other universities this season. 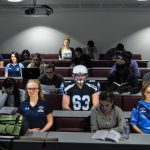 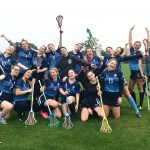