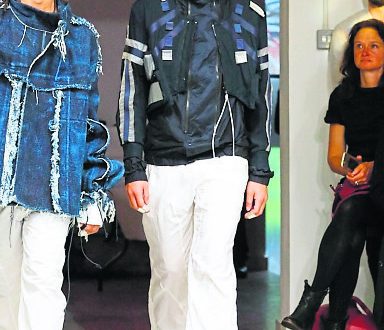 Mattoon (centre) walking down the runway at the Graduate Fashion Week.

A KU student known for his quirky dressing style landed himself into British Vogue online after walking the catwalk at graduate fashion week.

Kristofer Mattsson, made it into British Vogue online after graduating from Kingston with a BA in architecture this summer featuring in the graduate fashion week for fellow Kingston student, Charlotte McDonald.

Mattsson said: “I guess she thought I fit her collection and the theme of her looks. As everywhere else, Knights Park has nuances of how people dress. To be featured on online British Vogue, did feel like an accomplishment as I did what I was asked to do, and did it well enough to be published. As if it was an acknowledgement that I can model.”

Mattsson’s personal style which has been labelled as creative or experimental to say the least.

As an architecture student Mattsson stood out from the rest of his class due to his dressing style since his fellow classmates had a safer approach to clothes.

Mattsson said: “It might be more obvious as it is a creative and visual campus. The fashion course might be vocal about it, but then, they are starting a career in fashion. No one really wants to be a show-off, it is easy to spot a person like that, and at the end, it does more harm than the initial purpose.”

Mattsson says he gets his style inspiration from The Fresh Prince of Bel-Air, 80s and 90s Snoop Dogg, and in general hip-hop culture and it has gone through many iterations, but now it is, in a way directing its way towards a mix of Hip-Hop and LGBTQ.

His styling and dressing is inspired by his political and ethical stance within gender identity, and he credits the development of his personal style to his fellow students at his former campus. Mattsson believes he was put under the wing of many people from various courses and he was encouraged to be creative.

“I definitively hope there is a little room for me in the fashion world. It is an interesting thought to somehow merge architecture with fashion as I think they interact and inhabit the day to day life in such a big and important way, and have the two disciplines have so much to learn from each other,” said Mattsson.