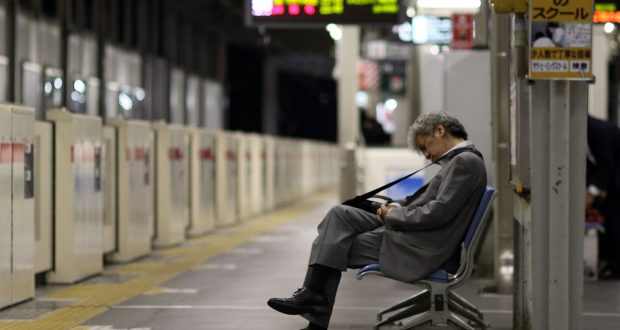 Japan's ambitious economic goals are raising the number of deaths.

‘My colleague committed suicide due to depression from overwork’

Japanese KU students shared their stories of being forced to work even with a temperature and catching the last train home everyday and agree that they would much rather seek work in the UK.

With a recent high profile death caused by karoshi, the toxic Japanese overwork culture, reports suggesting hundreds of deaths related to overwork every year in Japan have risen.

A KU graduate who wished to stay anonymous said: “When I was in Japan I sometimes had nearly 100hr of overtime in a month. At that time, I lost weight and always felt tired. And it’s not me, but one of my colleagues sadly committed suicide due to depression from overwork.”

Though the graduate wants to shed light on this issue, but due to the sensitive nature of the details she shared about her colleague she wishes not to be named.

She explains the prominence of this culture in Japan due to expectations of loyalty to the employers, leading to taking on too much work or staying until late everyday.

A fellow postgraduate student Chiemi (did not want to be fully named) said, “I worked at a commercial film production and then for a feature film. There is this word ‘Black’ when people describe their intense work environment, and in Japanese film industry, ‘Black’ is the standard situation.”

Chiemi only worked as an intern but still had such long working days that she caught the last train home everyday with the exception of one day when she had to spend the night at work.

She also puts the reason for such culture down to the fact that employees feel obligated to stay at work until their employer, leaving work before the boss is seen as a sign of disloyalty.

“It is not only the ambitions of Japan’s economy, but also this culture of customer’s demand being too high. There’s this saying ‘the customer is god’. People in Japan expect good services from everywhere,” she said.

The graduate feels that this culture is damaging and causes people to lose out on spending time with their family, further resulting in ”teinen utsu” – retirement age depression, common amongst people who give their lives to the company only to get depressed when they retire.

Both women agree that they would prefer to stay in the UK as they believe the working environment is much better here and they have a possibility of striking a balance between personal and professional lives without giving one up.

The graduate added: “I had a fever of 38 degrees and I told to my boss but he still wanted me to come to work and I did. Also I had to cancel appointments with my friends after work so many times because I suddenly got urgent cases. Most of the time I had dinner from the convenience store (24h news agent) around midnight and I had to get up 5:30am so it made me question ‘why I am doing this’.”