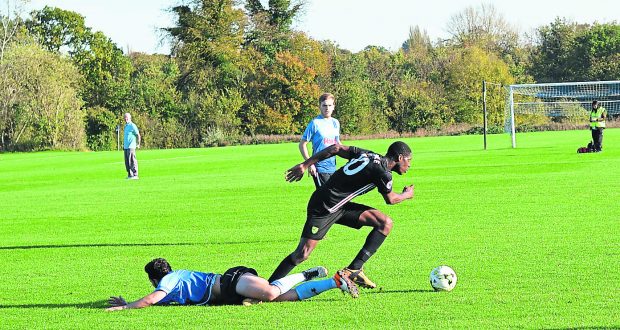 Football first team knocked out of the cup

Written by Synne Johnsson on October 30 2017

Kingston men football’s first team was knocked out of the South Eastern Conference Cup after they suffered a 2-0 defeat against Canterbury Christ Church, crashing out a round earlier than last year. It was an intense game filled with frustration after Kingston dominated the game for the first 20 minutes.

“It’s difficult to put it into words without swearing,” captain Greg Potts said after the game. “We started so well, we dominated the first 20 minutes, we were the better side even though they are a league above us.”

The first chance of the match came only three minutes into the game after a Kingston corner from Santi Navarro was headed over by Oscar Kotting.

In the eighth minute another chance went begging when a corner from Navarro found winger Hadi Habboushi whose shot smacked the bar and rebounded out into play. Potts created a good chance when he carried the ball into the opposition’s half, where he passed to Gurpz Tatla who went for goal, but his weak shot was easily saved by the Canterbury keeper.

The game’s first goal came midway through the first half where Canterbury’s striker ‘Trouble’ whipped a dangerous cross to Caleb Joyce who neatly put it in the bottom right corner.

Potts said: “They got a lucky goal on the turnover as teams keep doing against us this year.”

Kingston dominated big parts of the first half but did not have any luck when it came to scoring goals and went to half-time 1-0 down. Both teams seemed very frustrated from the start of the second half, with players aggressively swearing at each other and the referee, who had to blow the whistle repeatedly throughout the half.

It started with two free kicks back-to-back, first one from Mo Sesay and second from Potts, but none of them gave Kingston a reason to cheer. Canterbury came close to making it 2-0 when Joyce again received the ball from another dangerous cross but this time he was offside.

The next big chance for Kingston arrived when striker Tatla passed cleverly to Navarro, but no luck again.

Canterbury had a few chances in the second half, including a free kick in the 65th minute which was fortunately fired over the crossbar.

Another chance opened up for Kingston with some great passing between Sesay and Jonah Ross but Sesay’s shot eventually ended up over the crossbar.

The last goal of the game came five minutes before the end when Callum Emmett’s deflected shot ended up in the back of the net, making it 2-0 to the visitors.

This was the first and last cup game for the men’s first team this year, which is a disappointment compared to last year when they got further.

“We couldn’t break them down, third week in a row,” Potts said. “Couldn’t break them down and couldn’t create clear cut chances. “We have to work on turnovers, getting back into our shape when we lose the ball and being a more solid unit. We’re conceding easy goals at the moment, we have to cut that out and then we can build from there.”