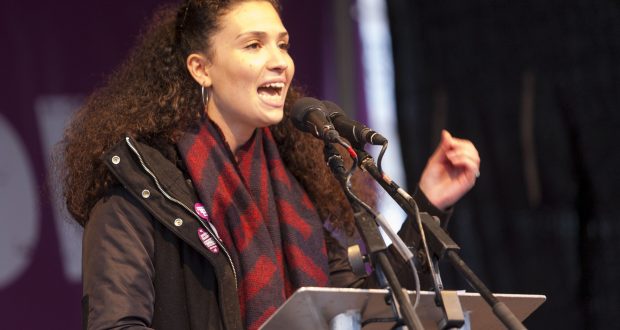 A former National Union of Students (NUS) president and black students officer, warned KU students against the dangers of a “white” curriculum and encouraged them to hold senior management to account.

Malia Bouattia spoke at an event organised by the Student Union as part of Black History Month to discuss the BME attainment gap, a current issue within higher education that sees black and ethnic minorities students academically scoring, on average, lower than their white counterparts.

“Now we are at a time when there is very little investment in closing the gap,” she said. “Among students and academics, there is a big push to hold the Vice Chancellor to account and question why there is not an investment in equality as opposed to open days and glossy brochures.”

Bouattia criticised Kingston Vice Chancellor Steven Spier for not speaking out against the government plans for higher education which will, according to her, shut out people of colour.

She defined Spier’s words as “just totally empty” since they are not bringing any effective change.

“If the Vice Chancellor is saying that we embrace the diversity of the Kingston community and want to take on this gap, but he is not speaking out against these [the government’s education] plans, then it is just totally empty,” she said.

However, Kingston University tackled the BME attainment gap and the number of BME students achieving a First and 2:1 degree has increased significantly.

A spokesperson for Kingston University said: “This is a concern for the University as we have a strong commitment to equality, diversity and inclusion.

“The University has set itself a goal to achieve a value added score of 1.0 for all of its BME students by 2019 [and] is well on its way to achieve its goals, with the latest figures showing that our score currently stands at 0.94, up from 0.87 in 2014.”

On KUBacker, its crowdfunding platform, a project called Kingston2Capetown raised £10,000 to enable 10 BME students to go to Cape Town and engage in international travel.

Bouattia held the position of NUS president for one year, from 2016 to 2017, before being voted out of office over allegations of her antisemitism led four universities to leave the NUS.

The event focused on the theme of decolonising education, meaning diversifying the curriculum and make it multicultural so that it becomes more inclusive towards people of colour and minorities.

The “whiteness” of the traditional academic curriculum was defined by Bouattia as the reason behind the underlying crisis within higher education, that leaves students from a minority background feeling rejected by the system.

On a national level, several universities have challenged the Eurocentric curriculum launching campaigns such as the “Why is my curriculum white?” campaign in opposition of the current academic structure.

“What we need to do is put the weight on the institutional barriers that exist. Not necessarily on the individuals themselves but looking at systems that are actively oppressing, rejecting and violently attacking people in our society,” she said.

Bouattia advised KU students to start challenging the limitations of their curriculum and materials given to them and to team up with their lecturers to push senior management into making the curriculum more inclusive.