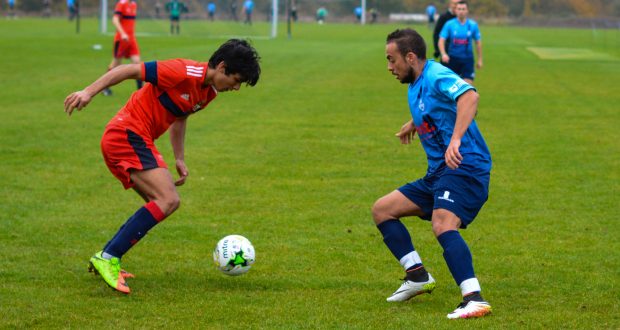 Written by Louie Chandler on November 16 2017

Jaeden Potts and Mo Sesay made the result certain with a goal each, leaving the whole team delighted. 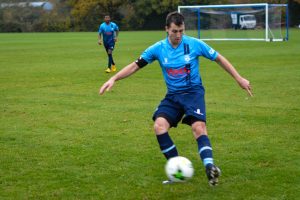 “We struggled a bit first half. Despite going two up we couldn’t create much from open play, but they were two brilliant goals from Yaw.

“In the second half our fitness told and we started playing on the counter and getting in behind, which is exactly what we worked on in training on Monday night, and they were two nice goals from Sesay and Jaeden [Potts].”

Kingston came into this game having lost both of their competitive matches this season, but started confidently.

The game was only five minutes old when Ofosu opened the scoring from a corner.

From Santi Navarro’s out-swinging delivery Imperial goalkeeper Mac Callamarus spilt Oscar Kotting’s near post flick straight into the path of Ofosu who bundled the ball over the line to make it 1-0. 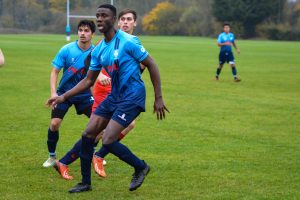 Kingston continued to push for a second goal, but they struggled to create any chances from open play and Imperial began to grow into the game.

A nasty collision between Sesay and Imperial left-back Juan Rojas left the latter clutching his knee on the ground, but he managed to continue.

Ofosu almost had his second of the game on the 24th minute when he flicked another Navarro corner narrowly over the bar, with the ball landing on the roof of the net.

Ofosu at the double

On the 26th minute it was 2-0. A Navarro corner was again swung into the box, and again it was a Callamarus mistake which led to the goal.

The American goalkeeper came out to try and punch the ball clear but completely misjudged the cross, leaving Ofosu to nod home his, and Kingston’s, second of the game.

The Cougars were well in control, but still never looked like creating much, with Sesay, Navarro and Hadi Habboushi being offered very little up front in the way of movement from Benjamin Simonsen. 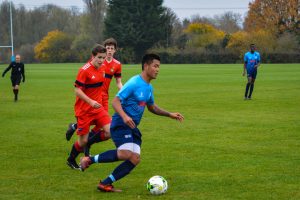 It should have been 3-0 on the 40th minute, but somehow Pranav Thapa’s brilliant cross evaded everybody as it flashed across the six-yard box and out for a throw in.

The missed chance looked even more costly five minutes later as the visitors pulled a goal back with their first meaningful attack of the game.

A glimmer of hope given to Imperial

Imperial midfielder Jack Rodwell won the ball in the middle of the pitch before playing Loic Brown into the box who pulled it back to Yiftach Cats to tap-in to make it 2-1 at the break.

“It isn’t a great time to concede and it’s a sloppy goal as well,” captain Potts said.

“We’ve given the ball away in the middle of the park, and then they played through us, and we don’t want teams getting through us so easily.”

As the second half got under way, it was clear that there were a few nerves among the Kingston players who were well aware that they should have a more comfortable lead.

Imperial should have equalised on the 55th minute when Rojas’s cross found its way through the Kingston defence but a sliding Jonah Ross snuffed out the shooting chance for Brown.

Habboushi then seemed destined to score down the other end but a tremendous save from Callamarus denied him, getting to his feet to save the winger’s effort acrobatically before holding on to Kotting’s follow up.

It was end-to-end action, and Imperial saw another golden opportunity to equalise wasted.

After a strong counter attack on the 77th minute Cats rounded the Kingston goalkeeper but took himself too far wide, leaving Kotting to clear his tame finish away. 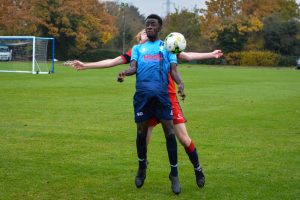 Five minutes later they were made to pay for their missed chances.

Sesay collected the ball on the byline after a lung-bursting run to keep Kotting’s long ball in play, before his cross was cleared only as far as Jaeden Potts.

The central midfielder made no mistake, sweeping his left-footed shot brilliantly into the bottom right corner from the edge of the box to give the home side some breathing space. 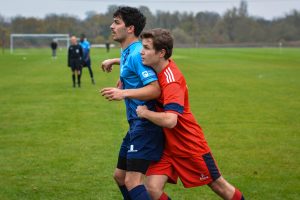 That goal gave the Cougars some freedom, as first Habboushi called the Imperial goalkeeper into another decent save from long range, before substitute Dylan Moore smacked the bar from a tight angle.

Sesay added some more gloss to the result on the 90th minute.

He collected Ofosu’s through ball before cheekily flicking the ball past the onrushing Callamarus.

The win means the Cougars have now won one and lost one of their two league games this season.

“In the second half we were confident and comfortable in possession,” Greg Potts said.

“Yaw had a cracking game in centre mid, and Jaeden alongside him. We looked really solid in there. I’m really pleased with that partnership.”

The Cougars’ next match is at home against the University of Brighton’s fourth team on November 29.