Review: Cloudy with a Chance of Meatballs 2 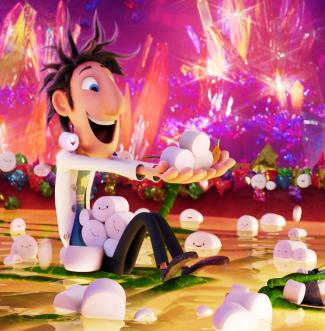 As Flint Lockward (Bill Horder) returns to the big screen for another food-filled extravaganza, Cloudy with a Chance of Meatballs 2 picks up right where its predecessor left off.

Thinking he destroyed his invention of the “Flint Lockwood Diatonic Super Mutating Dynamic Food Replicator” in the first film, Flint is surprised to discover that his invention is still working and creating “foodimals” all over the island of Chewandswallow.

With creatures like the flimangos, shrimpanzees, apple pie-thons and tacodiles wreaking havoc across the island, it is up to Flint and his buddies to fix it.

But unbeknown to him, new character Chester Z (Will Forte) is out to cause even more trouble.

This bright and cheeky 3D animation is not one that can be missed on the big screen. With its abundance of colour and captivating characters, it is a scrumptious treat in the cinema.

The little strawberry called Barry could rival a minion any day for the world’s cuteness award.

That is, until the marshmallows, which will make you go gooey inside, are introduced.

While this film is littered with cheesy food puns, it does not quite make up for its, at times, unconvincing and weak script.

But let us not forget that this is a kid’s film and it does very well in expressing its moral message: not to destroy the environment.

With its quick wit and the endless amount of puns that will have you giggling in your seat, this is a film that will leave your mouth watering for more.

Cloudy with a Chance of Meatballs 2 will be in cinemas on October 25.