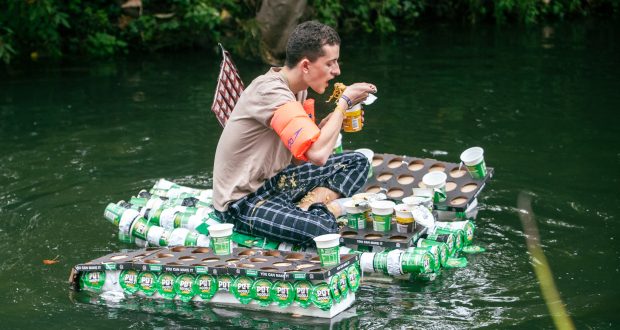 Reuby had to wear armbands due to health and safety regulations. Photo: Rosanna Turk

Written by Elena Cherubini on November 25 2017

A group of first-year graphic design students made a raft out of Pot Noodle cups and sailed down the Hogsmill river for a university project.

The six students created the raft for their first project of the year which consisted of inventing and breaking a world record.

Their record was ‘the highest number of pot noodle cups eaten on a raft made entirely of pot noodles’ and the result was three in one minute.

Chay Reuby, 19, sailed the raft while the other group members who helped creating it, took photos and videos of the performance.

Reuby said: “Being on the raft wasn’t as bad as I thought. I spilled quite a bit of the noodles and it was messy.

“I thought I was going to fall in straight away but I ended up lasting for quite a bit.” 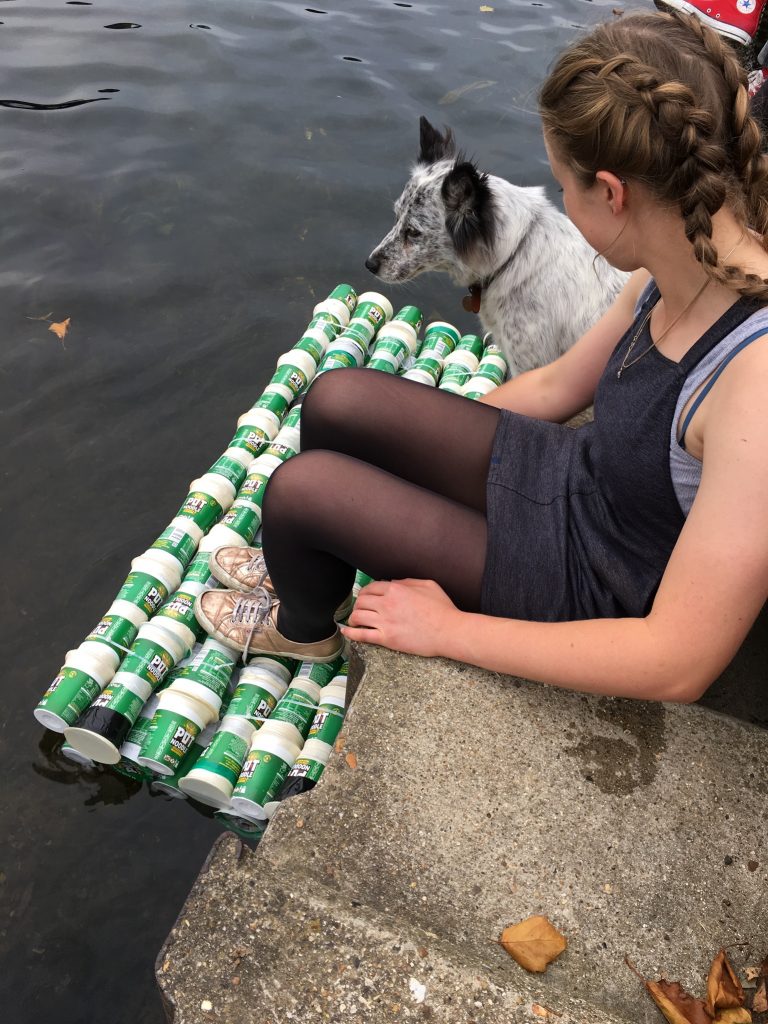 A dog almost jumped on the raft during testing. Photo: Rosanna Turk

The project idea was a direct reference to student dependency on pot noodles as they are a cheap easy option.

Group member Rosanna Turk, 19, said: “We had to think about the truth behind something, we are all students, none of us can cook. We had this story idea of imagining waking up after a drunk night out and finding yourself floating down the Thames on a raft made of pot noodles.

“We just had to be as ridiculous as we could be which I think we achieved.”

The students had four days to complete the assessed project and scored A+ for the research and A- for the execution.

The short timeframe made the assessment “really tricky” in terms of planning and construction as none had previous experience.

Elycia Field, 19, said: “We had to work out the buoyancies and then testing and retesting. We are not engineering students, we didn’t know how to make it.”

The presentation day was the raft’s maiden voyage as the students did not know if its integrity could support more than one trip down the river.

The students were supported in their idea by the environment at the university which allowed them to be as creative as they wanted.

“Nothing is too far out. Mainly you will get in trouble for not being creative enough,” Field said.

The group got in contact with Unilever, the company that owns the Pot Noodle brand, and are waiting on a possible reimbursement for press purposes.