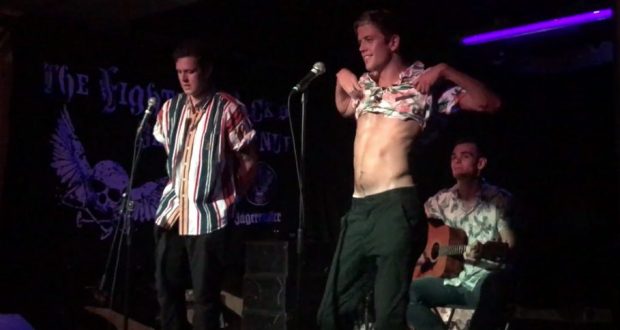 Alex and George avert their gaze as Toby strips off on stage PHOTO: EDEN RUDDICK

Once a month, comedy band Dor Slammers drunkenly stumble their way to the Fighting Cocks stage to perform in front of a loyal, rowdy crowd.

They play a mix of original music and parodies of classic noughties songs like the ones played in the cheese room at Pryzm.

The band, consisting of former KU drama students Toby Everett, 22, Alex Lowe,22, and MA student George Adams,23, jokingly compare themselves to Oasis and The Beatles but admit they have limited musical talent.

The most note-worthy gig they have played was Vannfest this summer but their biggest crowds are the loyal fans that show up to the K for Komedy Cabaret, ran by the band’s own Toby, each month.

If you ask the band why they started, Alex and George will tell you it came from messing around in their kitchen creating stupid songs that they then wanted to perform on stage at a charity cabaret. If you ask Toby however, he’d tell you it was to get loads of girls. Tons. Millions.

When Toby told us this, George was quick to deny his claim: “It wasn’t. It definitely wasn’t. He speaks for himself.” 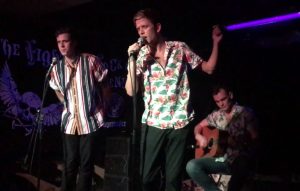 “That’s what I go to spoons for, go there for the decor” PHOTO: EDEN RUDDICK

They all ended up living together during their third year at Kingston where they first met. They spent a lot of time sitting around in their living room changing lyrics to songs.

The first official song for Dor Slammers was a parody of Bryan Adams’ Heaven which they titled ‘boozy’. The song details a typical night out in Kingston and caters to their usual audience at the Fighting Cocks.

Their next song came naturally to them after one of their own nights out in Kingston. When the band came back to their house, George wanted to play his guitar in the kitchen and a drunk Toby started to jokingly call their friend a stupid bitch and the rest was history.

Since then ‘Stupid Bitch’ has become a crowd favourite and Alex says that “having stupid bitch sang back to us is ridiculous but feels really cool.”

Their material comes from their filthy sense of humour and is loosely based on their own experiences.

George says: “We try to play up to the whole stereotype of being laddy uni boys because it’s so dumb that anybody can get it.”

He added: “Over the years our sense of humour has just got more and more deranged to the point that we laugh at things that aren’t funny.”

Since they all graduated from Kingston, the trio has had difficulty rehearsing. While Toby and George stayed in Kingston, Alex has moved outside of London.

They went from being able to rehearse whenever they wanted to meeting a few hours before the show and rehearsing in the Fighting Cocks backstage area better known as an old toilet.

On stage the band play different roles. George, who had to be convinced to perform in the first place, prefers to be in the background while Toby and Alex fight for the limelight up front.

Particularly for their original song ‘Girly things’ Alex is the ‘nice’ guy while Toby plays the more outrageous character.

Their most recent song based on Torn by Natalie Imbruglia came from Toby’s own filthy mind during a train ride back to London. He cannot remember whether he heard the song through someone’s headphones or not but the lyrics just came to him: “your period was late, by three days or four”.

While they are on stage the comedy does not stop with their songs and often the band tries to mess with one another on stage.

Alex remembers a moment from their first performance when George stopped playing to try and mess him up.

“George randomly stopped playing halfway through one of my bits so that I’d look the fool,” Alex says. “That was in February and I still don’t forgive him.”

However, George remembers the incident differently. He believes Alex forgot the words but covered it up by telling the audience that George had stopped playing so, confused, George stopped playing.

“He just forgot the words, the dick,” George says while Toby laughs. 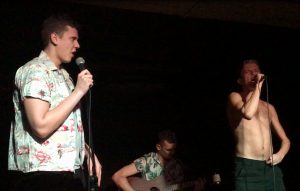 There have been many incidents since then that the band has messed up on stage including at their most recent performance when George’s guitar strings snapped.

The band remembers one time when they were at Vanfest performing ‘Girly things’ which includes a kazoo solo and Alex forgot the kazoo.

George added: “I could see sheer horror on his face.”

“By this point I’d already sang the word kazoo so I had to do something,” Alex says. “Instinctively I made the stupidest fake kazoo noise while I tried to make it look like I was holding a kazoo. It was awful.”

Toby got them the Vanfest gig and is usually the one who arranges everything but there is a disagreement on who is the true leader of the band.

The band agree that there is no definitive leader though George and Toby said Alex has been trying to establish himself as the leader.

On stage they all wear Hawaiian shirts, their signature look, but recently Alex showed up to one performance in a different shirt.

“I actually hate him,” Toby says jokingly. “He just turned up in this rafaran shirt and we were like ‘Alex what are you doing?’

“He was like ‘everyone needs to know I’m the leader.’”

George would say that Toby was the closest thing to a leader that they have but Toby would not admit to that on record.

George says: “On the record you would say that, off record-”

George added: “He rules with an iron fist.”

Regardless of whoever is the true leader, Toby plans to expand their act outside of their monthly cabaret to more festivals and gigs around London such as the Half Moon comedy night in Putney.

They hope to write more original songs and are planning a Christmas parody for their Cabaret on December 14.

If you think you’re funny too, you can get involved in the K for Komedy Cabaret alongside Dor Slammers by emailing Toby on: toby.kforkomedy@gmail.com