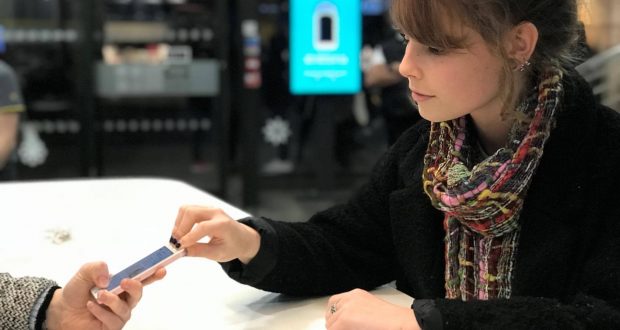 Barnard struggled throughout the week without her mobile

A week without your phone, could you do it?

Written by Bekka Barnard on December 5 2017

A week without your phone – could you manage it? Find out how journalism fresher Bekka Barnard survived seven days mobile free.

The recent releases of both the iPhone X and the Amazon Key have sparked concerns that modern technology is becoming too invasive. Both of these products have two features – the iPhone X’s Facial Recognition software and the Amazon Key’s “smart lock” which grants couriers home access to deliver parcels – which could be seen as both revolutionary and concerning, as smartphones and other sophisticated technology play a vital part in the average person’s life. For example, a ComScore report back in March 2017 revealed that the average adult spends 86 hours a month on their phones

‘Is your smartphone ruining your relationship?’ by Julia Dellitt explains how these habits are damaging personal relationships; “It’s easier to hide behind a screen than actually connect with your partner. Connection is hard work; it makes us vulnerable, and there’s a sense of not being in control, whereas a phone serves as instant gratification.”

I’d like to say that I am far from addicted to my phone…I can definitely live without checking my Twitter for a few hours, but after reading Dellitt’s article I realised that I use my smartphone pretty frequently throughout my day, from my alarm to checking my calendar. Like most of us, without it I would be lost.

To see whether smartphones really are the modern life support machine, I set myself the task of a week without my phone, unable to contact my friends or family via social media, FaceTime or text messaging, and to be honest, the thought was sickening.

Nevertheless, I began the first day positive, but I quickly realised how much I was reaching for my phone to contact my friends. I had serious FOMO (fear of missing out) and was dying to tell them about something funny that had happened. If I wanted to see them, I had to go old school and knock on their doors to see if they were in. I felt like I was back in Year Seven.

It was during the second day that I really began to notice that the ban was massively affecting my overall mood. I didn’t expect to feel like this so early on, but the inability to text my boyfriend or FaceTime him at night was beginning to bother me, and it was frustrating being unable to catch up with one another.

The halfway point arrived and I decided to break the the ban as my best friend was starting a new job that day, and I wanted to speak to her. Also, I was dying to check every app I had. It had only been two days but I already felt completely out of the loop. I tried to convince myself that I wasn’t dependent on my phone, and that the break was not initiated as a result of my dependence on technology, but more because of my interest in my friend’s life.

Day four I was clearly missing my phone. I caught myself reaching for my phone more than ever after the taster I had yesterday, and at the end of the fifth day I decided to cut the experiment short as I had planned to go out with my friends and couldn’t resist drunkenly Snapchatting the entire night. A wave of happiness came over me the moment I checked my Facebook and saw the amount of memes my friends had tagged me in.

There’s no denying that technology has had a lot of negative press, and yes, maybe products such as the Amazon Key are a step too far, but what would we do without it all? How would we stay in contact with our loved ones, speak to friends on the other side of the world, stay up to date with the world around us, and most of all tag our friends in pointless videos of puppies and kittens and a whole spectrum of cute animals? Balance is key…learning how to distance yourself whilst also embracing a revolutionary digital age. It’s good to put your phone down once in a while and appreciate what’s around you.