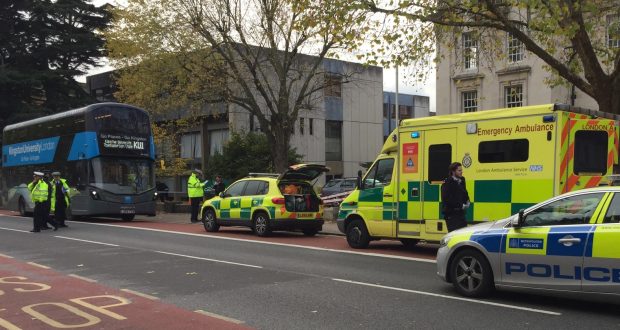 Emergency services on the scene after the crash PHOTO: Megan Foster Flaherty

POLL: Are you a “smombie?” AA warns no texting while crossing the road after KU bus crash

KU students must stop using their phones when crossing the road after a student collided with a university bus and was airlifted to hospital, road safety experts warned.

On November 8, students watched in horror as the unnamed 18 year-old KU students was thrown into the air by a KU1 bus at approximately 11:30 am.

Paramedics treated the teenager on the pavement outside Surrey County Council and the student was said to be in critical condition.

The AA found that seven out of ten motorists see gadget-obsessed pedestrians walking off the pavement without looking on a regular basis.

A spokesman for AA said: “We can only stress to pedestrians that if they’re going to cross the road that they put down their smart phones and pay attention to what is going on around them.

“If you pay attention then you’re less likely to get hit by a car driver, who despite their best driving, stands no chance of avoiding the accident if a pedestrian steps out in front of them.”

Edmund King, the head of the AA, referred to pedestrians who use their mobile phones and do not pay attention when crossing the road as “Smombies” or smartphone zombies.

He said he feared older children were becoming increasingly careless when crossing the road because they were using their smartphones.

Head of road safety at The Royal Society for the Prevention of Accidents (RoSPA) Kevin Clinton said that it is important to be aware when interacting with traffic.

Clinton said: “Looking properly when you are walking is as important as when you are driving, so take care not to be dangerously distracted, whether by mobile phones, listening to music or being caught up in conversations with other people.

“Being able to use all of your senses while you are on the road is important and using mobile phones can, of course, be distracting.”

Environmental Hazard and Disaster Management student Thomas Dack, 25, said: “Everyone is guilty of not paying enough attention sometimes, for example mobile phone use.”

After rumours that the KU student was dead, it was revealed that the student suffered a minor concussion and he is now fine.

Don DeMeo, a 22-year-old economics student, said: “I was on the bus looking at my phone and then heard and felt a very loud thump.

“I looked up and saw a kid go flying through the air. I left the bus and he was unconscious.”
The driver took a few days off for stress and was found to not be at fault.

Councillor Phil Doyle, a Cabinet Member with the responsibility for transport and highways at Kingston Council said: “We’re saddened to learn of the accident on Penrhyn Road.

“The council has a responsibility to take appropriate measures to reduce and prevent accidents, as well as promoting road safety for all.”

Last year in Kingston, there were 21 pedestrian road casualties, and two were serious and 19 slight casualties.

The Penrhyn Road bus incident was just one of three accidents that have happened in Kingston this month.

Councillor Jon Tolley has called for a ‘road safety report’ to see if there was an increasing trend in the area that may only worsen during the Christmas period, or if it was just coincidence.

Tolley said: “It would be wrong for me to pre-empt the report but I am worried about it, for sure. My gut feeling is more cars and more people equals more potential for incidents like the ones we’ve just seen.”

The council have said that they will review the findings of the ongoing police investigation and consider whether urgent action needs to be taken.

Doyle said: “Any work will be linked into the borough’s transport strategy, which includes a commitment to reduce serious injuries and deaths on Kingston’s transport network.

“The council assesses annual accident and collision data and submits bids for improvement through this strategy where appropriate.”

This news comes two years after KU sports student Hina Shamim was killed by a speeding driver on Penryhn road.

Shamim was mowed down by a white BMW that was going above the speed limit and was killed instantly.

Following this, a pedestrian crossing was put in place by the council to help students cross the road safely.

A Kingston University spokesperson said: “KU takes the personal safety of its students and staff extremely seriously, liaising regularly with the police and council and producing a great deal of guidance on staying safe on campus. Safety advice is also provided to students during induction.”

They urge students to use the three pelican crossings in the area.