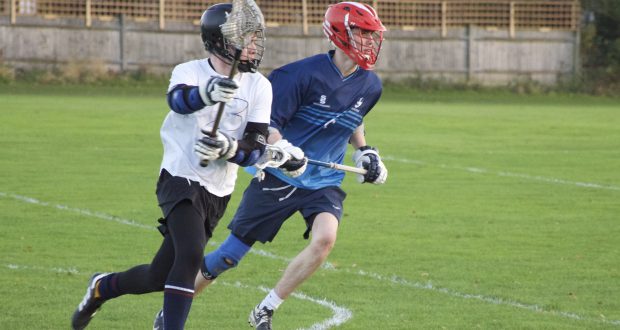 Written by Synne Johnsson on December 3 2017

Kingston attacker Ewan Leslie scored five goals in a tight cup game against Canterbury – but it was not enough to keep the blues in the cup.

Hot shot Leslie scored the first goal in the beginning of the second quarter and kept scoring throughout the game, ensuring a close match in his Kingston debut on Wednesday 22.

It got dramatic when captain Connor Mottrom knocked down Canterbury’s Joe Holland, leaving him down in the third quarter. The game was soon paused and Holland was carried off the pitch while the Canterbury coach berated the umpire for seeing it too late. Holland was down for the rest of the game, throwing up due to a suspected concussion.

Mottrom said: “All the boys played their hearts out which was really nice to see. We had a bit of a disadvantage because they brought 17 players and we only had 10, but it was such a close game and I can’t ask for more from the boys. This was by far the best game of the season.”

Kingston dominated most of the game and the Kingston defense was strong, keeping the Canterbury Christ Church attackers at bay, but the visitors had the legs which at the end of the day gave them the win.

The first and only goal of the first quarter came seven minutes into the game when Canterbury’s Jake Gilbert got the ball, ran around the goal and shot it straight past Kingston goalkeeper Courtney May.

Kingston dominated the second quarter, but Leslie’s second goal seemed to have woken up Canterbury because only a few minutes later Giorgio Michael got the ball, ran it around goal and shot it straight in the top corner, making it 2-1 to the visitors. The blues had several shots at goal by the end of the quarter but none of them went in and they went to half time with 2-1. 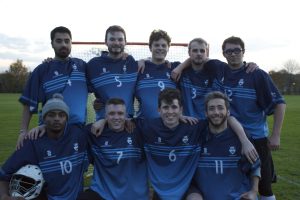 Third quarter started with the Canterbury attackers dominating the game with Michael in the front, but Zachary Fountain had it all under control and did not let Michael pass.

It got nerve wrecking for the Kingston supporters when May got the ball and ran it all the way up to the visitor’s half and dropped it, but he was fast back and the defenders saved the team from letting in another goal.

Canterbury then made it 3-1 despite Fountain playing hard on Michael, but when the ball was passed on to James Read, they were not to be stopped and the ball hit the net.

Harman Singh later won the ball in Kingston’s half and ran it up to attack, passed it to Leslie who quickly fired it in the back of the net.

The ball went back to the middle where Mottrom won the face-off, passed the ball on to James Sombach who took it behind goal, passed it to Leslie who scored yet another goal, ending the quarter with a 3-3 draw.

The fourth quarter started with Canterbury’s Gilbert passing the ball to Michael who made it 4-3.

A few minutes later Gilbert got the ball again, ran past all Kingston defenders and scoring Canterbury’s fifth goal.

Even though Mottrom won the following face-off, Michael managed to snap the ball, run it around the goal and score their last goal of the game.

Leslie on the other hand was not yet done, he won the ball and went for goal from the 15 metre, smashing it past the goalkeeper and bringing it to 6-4.

Not long after, Leslie got the ball from Mottrom right in front of goal, turned around and scored, only seconds before the final whistle was blown.

Leslie said: “I loved seeing the freshers getting involved and everyone gave a hundred percent which was wicked. We got some good goals and it was a close game.”