We speak to Kingston students about their flatmate-related horror stories 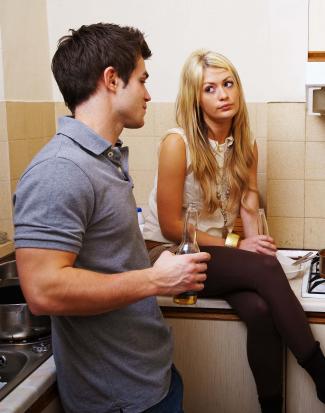 When thinking about their past-and-present flatmates, students will remember the fun, friendship and Foster’s beer in abundance. It’s a group of individuals you know will always have your back covered (quite literally…when carrying you home from Oceana).

But what would you do if your living situation was more pain than pleasure? The River spoke to Kingston’s students for some of the strangest stories of the housemates from hell.

Boy in the house

One student started her first year without halls with a Facebook flatmate and a set of rules instead.

“We met on a Facebook group, both desperate to find last-minute accommodation. She said she was originally from LA and coming to Kingston to study. I thought I was going to be living with Kim Kardashian,” she said. “Until I discovered on our move-in day that she’d lied to me and was actually going to a different uni.”

The lies weren’t the only shady thing about the student’s new flatmate. “She made rules, such as having to give a week’s notice before any of my friends came over, and I wasn’t allowed to have boys over under any circumstances.

“One memorable occasion was the time one of my best male friends from home came down to visit as I was feeling so down about my living situation. I had to tell my flatmate he was my cousin before she would even let him into the house, but she still cried at the fact that there was a boy in the house. My mum is a more relaxed character than she was.”

The student knew she had to leave at the end of her first year, but her ties with her old flatmate couldn’t be severed that easily.

“She stole £60 of my deposit at the end of the tenancy, claiming it was for a bill I’d actually paid,” she angrily recounted. “Despite contacting her on numerous occasions, and even getting my parents involved, I never heard anything from her again…”

“I had a really awful flatmate in halls,” said an anonymous third year student. “She used to take class A drugs constantly, and subsequently trashed the kitchen and stole our food on more than one occasion.

“The worst was when she would have sex and enjoy it at the top of her voice,” said the student in horror. “It got until Christmas of first year before we had to confront her and ask her to go!”

One student spent his first year at university living with a salesman of a totally different kind.

“He was a drug dealer, so nearly every night we would open the door to completely random strangers he had invited over to do business,” he said. “We confronted him about it but it just made his behaviour towards us more hostile and intimidating.”

The student recalled one particularly terrifying incident when opening the door to yet another stranger: “He was a friend who my roommate owed money to, and on this occasion he was so angry when I opened the door that I genuinely thought I was going to get my head kicked in. The other roommates and I ended up having to just ignore knocks at the door unless we could be sure we knew who it was.”

This businessman-cum-flatmate also allegedly spent a lot of his free time indulging in the drugs he sold, leading to more unbearable behaviour.

“One time he came in high as a kite and tried to cook himself some food, but he ended up falling asleep and leaving the gas on,” says the student. “I came back to a flat full of gas and everyone else was asleep. Not only could this have killed everyone in the flat, but had someone walked past the premises with a lit cigarette things could have been a lot worse.

“He of course denied the incident and tried to put it on another flatmate. I moved out as soon as I could.”

A second-year student recalls one particularly busy flatmate, with her harmless fun quickly turning into something more serious.

“In my first year one of my flatmates was extremely promiscuous. It started as a joke but became strange when we noticed it was happening more and more. By October she would have boys over every night, sometimes more than one per evening as well,” she said.

“We tried to ignore it but then one day we saw one of the boys leaving and handing her a wad of cash. That’s when it changed when we realised she was doing it for money. She didn’t care that we knew though.

“She thought she was some kind of celebrity, always spending the money on clothes and bags,” the student told us. “Unsurprisingly she didn’t last long on her course, and left just before Christmas!”