A former KU student has sculpted his way to the top, taking influence from various African countries. 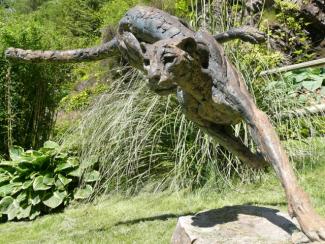 Hamish Mackie, a former KU product and furniture design student, is making his way up to become one of the best wildlife sculptors in the UK.

His work is influenced by several wildlife sculpting artists but his inspiration mainly steams from observing wildlife in their natural habitat.

“I like seeing the animal in its own environment, where an animal is living and surviving as it would in the wild rather than the zoos,” Mr Mackie said.

Mr Mackie visited different countries such as Namibia, Kenya and UEA to observe wildlife and is looking forward to visiting Australia, India and Uganda to observe gorillas.

The artist has always been interested in sculpting, even though his degree at Kingston University was based on design.

“Design is less hands on and is more computer orientated and I am a more hands on kind of person,” Mr Mackie said.

However, Mr Mackie found doing a degree in product and furniture design was useful to learn how to deal with designers and architects.

Mr Mackie had a normal student life in Kingston University.His favorite place to hang out with friends was the Gazebo by the riverside.

“It was good fun, I loved it. I did not work hard enough but had a lot of mates and enjoyed myself,” Mr Mackie said.

Mr Mackie favorite sculpture is a life size bronze sculpture of a cheetah observed in Namibia.

“The cheetah was done after a trip to Namibia. I did smaller versions of the cheetah when I was in Namibia and then came back with the measurements, video and photos and made the big one,” Mr Mackie said.

The former KU student is originally from Cornwall where he used to watch animals at his parents farm.

His life in Cornwall influenced his career choices but it was only when he first visited Africa that he decided to give sculpting a go.

Mr Mackie believes that students who are interested in sculpting should ‘work hard and stick to it’ without fear of failure.

“My first several years were really slow and I ended up living with a friend of my grandmother for one year so my living expenses were minimal. I had a free studio, did not go out very much and focused on sculpting,” Mr Mackie said.

Mr Mackie’s work was at a solo exhibition at Cork Street in London until the 19 of October and he is now on the move.