A KU student is training to enter two Half Ironman triathlon races which will take place this summer.

KU student trains for half Ironman

Written by River Reporter on October 28 2013 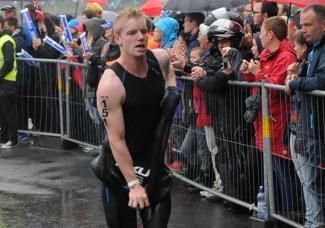 Kris Saeby, a Norwegian sports science student, started developing his love for triathlon races ever since he was 12. This year, in addition to training with a coach at Kingfisher Leisure Centre, he joined the brand new KU triathlon club.

“This is my fourth season coming into iron man and half iron man. I really want to improve from last year and try picking up some sponsorships. You have to get results and be consistent in how you train,” said Kris.

This summer is not the first time that Kris will compete in triathlon races.

“Back in April I was asked by the Norwegian Triathlon Federation to compete for them in the London grand final International Triathlon union championships,” said the 22 year-old “I ended up 51 in my age group. I think that was 5 or 6 in Norway Overall."

The Half Ironman is also known as an ironman 70.3. It is a series of races organised by the World Triathlon Corporation. It consists of a 1.2 mile swim, a 56 mile bike ride, and a 13.1 mile run. Along with a lot of dedication, Kris has had an impressive amount of support from his mother, who has done seven Ironman triathlon races.

He said: “My mum has always been supportive. She always tried to motivate me to come out with her on training rides when I was younger. Her support is definitely what has motivated me to do as well as I have.”

In addition to many hours a week of hard training with his coach, he also tries to join the triathlon club on their trainings and social nights out.

“I joined because I haven’t really been involved with clubs up until now,” said the 22 year-old. “I thought it would be fun to socialise and share my knowledge of triathlons with other people who are interested in it as well.”