Campaigners were outside Richmond Park to protest against the deer cull

Written by River Reporter on November 11 2013 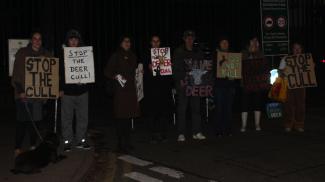 Campaigners protested outside Richmond Park on the opening night of the deer cull saying that other options were available.

A small group gathered outside the park gates to show their opposition and raise awareness.

Each year there are two culls, one in February and one in November, to control the number of animals in order to avoid diseases and overgrazing.

The unlucky deer who get shot every year end up being sold off for their meat. Royal Parks say the money generated is invested into the parks.

“They make about £30,000 from the venison. They like to make money from the meat sales so it’s very clear that money and also habit is behind it. They don’t want to change and try something new because it means a lot of effort to change,” Dove added.

The cull is endorsed by the British Deer Society and the Deer Initiative for England and Wales, the two main deer welfare groups.

“It's easy to think of Richmond and Bushy Parks as open countryside and therefore expect deer populations to find their own level as they do in the wild. However, the parks are enclosed spaces with only enough grazing to sustain a finite number of healthy animals,” said David Brownlie-Marshall, a spokesman for the Royal Parks.

Campaigners say that there are other options such as contraceptives that are being used in the US. However these methods are still at an experimental stage and are not licensed in Britain.

Dove said: “There’s a new experimental contraception available and it’s ideal for somewhere like this if they darted just a number of the female deer they could keep the numbers from breading so much.”

Protesters also argue that the deer population would eventually regulate itself if left alone even in an enclosed area. They say that evidence shows that the animals will naturally have fewer fawns when the population grows.

Open to other options

Brownlie-Marshall said that contraceptives were not an option yet: “There are concerns that contraceptives introduced through feed and not consumed by the deer herd would impact negatively on other species. To inject contraceptives requires a high degree of human intervention which is highly stressful for the deer as they are not able to be herded like farmed animals.”

Royals Parks say they are not completely closed to other options, Mr Brownlie-Marshall said:“We are carefully monitoring the worldwide development of technology to limit deer populations and will continue to keep our policies for the management of deer under review.”