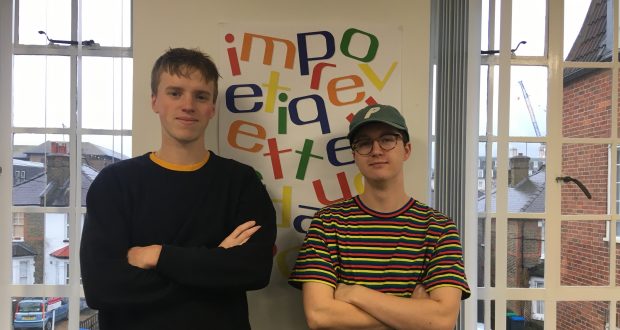 Written by Hannah Roberts on February 1 2018

Two KU graphic design students won a competition to create a window display for the bookstore Foyles after leaving it to one of their fathers to pick out the winning design.

Charlie Jeffries, 20, and Seb Price, 22, were torn between which initial designs to follow up on for Foyles’ display on Rutger Bregman’s Sunday Times bestselling book ‘Utopia for Realists: And How We Can Get There’ until Price’s father said that he preferred the design that eventually won them the competition.

Their design featured a huge orange clock with key utopian ideas taken from the book – including Free Health Care, a 15 Hour Week and Workers Rights’ – to replace the numbers on the clock face.

Price said: “I wasn’t 100 per cent set on the clock design, I just put it out there and we were talking about itand my dad just said ‘Go with it, it’s really cool, I like that one’ and so I just thought, well, maybe we should.

“When I told my dad we’d won the competition, he just said ‘told you’.”

The duo beat ten other applicants to win the window display space set to go live on February 5 in the bookstore’s Charing Cross Road branch.

Since they were so busy with coursework before the term ended in December, Jeffries and Price communicated throughout the Christmas break via Facebook and Skype, only hearing about their success on the day of their dissertation hand-in.

Price said: “I felt immense happiness at getting the email but it also made me not want to finish my dissertation.”

The live project made a welcome change from dreary assignment deadlines for the duo.

Price told The River: “It is really valuable to work on live briefs when you can because it’s more real-world than when you have a deadline which is kind of arbitrary and it doesn’t really matter if you meet it or not. This is way more exciting.”

Jeffries said that their win was a unanimous decision by the judges.