Written by River Reporter on November 15 2013 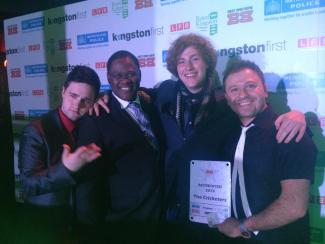 This week the Kingston Best Bar None awards celebrated some of the best venues in the borough.

The glamorous event in its eighth year was held at Hippodrome on Tuesday evening with staff from venues in the town centre attending.

The deputy Mayor of London, Stephen Greenhalgh, alongside the head of Kingston council, Liz Gree, took part in the ceremony and delivered speeches congratulating Kingston on its night-time economy.

The evening was hosted by cheerful entertainer Miles Crawford and 18 pubs and clubs received a Best Bar None accreditation.

Working alongside the clubs and pubs are the street pastors who won the award for “best contribution to night-time economy”.

The organisation has volunteers on the streets at the weekend to offer support to those who have had too much to drink.

Paul Jacobs, coordinator of the Kingston street pastors, said: “I feel really good about it, I think it’s a thank you to the team for what they do and I think it’s a really nice thing to do. It’s nice to be recognised for doing something that is useful to other people.”

Efforts to make Kingston a safer place were also recognised after the borough was named the safest in London by Metropolitan police this year.

Jacobs said he had noticed a drop in violence but pointed out that Kingston is not a violent borough and that a small drop in crime has a big impact.

“I think when you have the number of people who come into Kingston there’s always going to be incidents when there’s alcohol involved,” he said.