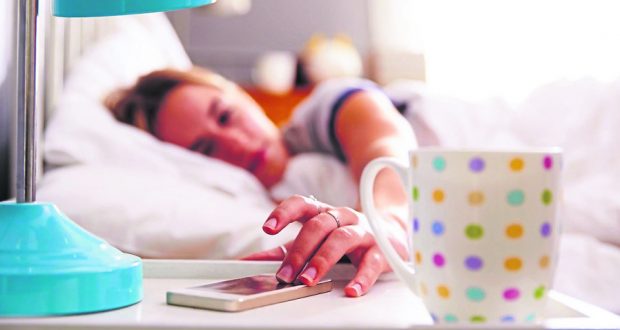 A recent study has found a correlation between social media and a lack of sleep. Photo: REX

Why social media is causing a lack of sleep

Written by Sophie Parrott on February 14 2018

Being a student is tiring. Three years of hard-core binge drinking, partying into the early hours at Hippodrome’s finest foam parties, and devouring greasy food from Eden Kebab to soak up the hangover from hell.

Naturally, the student lifestyle does not lend itself to early nights and hours of undisturbed beauty sleep.

In a lot of cases, sleep deprivation in students is entirely self-inflicted, particularly if a night out on the lash is involved. But is there an alternative explanation to what is causing this never-ending tiredness?

A study published in Acta Paediatrica, a peer-reviewed monthly journal for international paediatric research, has found a correlation between increased social media usage and a lack of sleep.

The 5,242-wide study of Canadian students between 11 and 20-years old found that 63.3 per cent of participants slept for less than recommended. People aged 18 and above are recommended to sleep between seven and nine hours per night.

The study also found that 73.4 per cent of participants use social media for at least one hour per day which concluded that a greater use of social media was associated with shorter sleep durations among the participants.

Senior author, Dr. Jean-Phillipe Chaput of the Children’s Hospital of Eastern Ontario Research Institute, summarised in the report: “The impact social media can have on sleep patterns is a topic of great interest given the well-known adverse effects of sleep deprivation on health. Electronic screen devices are pervasive in today’s society and we are just starting to understand their risks and benefits.”

Dr. Neil Stanley, a sleep expert, said that individuals need to decide how much sleep they need themselves. “You need to work out how much sleep you need to feel your best and then put this amount of time aside each day to get a good sleep.

“You should spend at least 30 minutes winding down before bed. This means turning the TV or computer off and doing the things that help you quieten the mind and relax your body; don’t do work and don’t argue with your partner.”

Most students at university suffer from ‘psychological fatigue’ which is a type of stress caused by a combination of overworking and a lack of sleep.

A study conducted by the University of Virginia Tech found that this type of fatigue is particularly prominent in students due to varied sleep patterns, the stress of deadlines, and juggling extracurricular activities with external job schedules.

Balancing different university modules simultaneously can be exhausting. Third-year KU drama student Georgie Barlow, 20, has had difficulty sleeping since high school. She said: “Sometimes when I find uni has been extra stressful or I’ve been working late, my mind can’t rest or shut off, so I often end up staying up from that. I also deal with anxiety and seem to suffer worse from it at night.

“I probably spend about half of my day on my phone because it’s how I keep in contact with my friends. I think it impacts my sleep when I’m on my phone until the minute I try to sleep. I also find when I can’t sleep, or I’m struggling to relax, I scroll through Twitter or Instagram for hours.”

Barlow said that her mind seems to focus on whether or not she has enough time to complete everything that she needs to before going to bed.

The drama student commonly goes on YouTube to distract herself from feeling stressed and to make herself sleepy when she is wide awake at night. She says that she isn’t addicted to social media or to using her phone, but her social media usage does impact her more when she can’t sleep.

“I’ve done yoga a few times to try and stretch my body out and relax, I’ve also used sleep sprays to put on my pillows, but it’s hard to tell if they work.”

Kieran Hawkyard, 20, a creative writing and English literature student, juggles working part-time at a supermarket whilst studying at KU.

Despite finishing work late, he said that this does not impact on his ability to sleep. Sometimes, he stays up until 3am writing his assignments because this is when he feels he is at his most creative.

Hawkyard, who sometimes experiences difficulties sleeping, said: “Sometimes I can be on my phone in bed and I will lose track of time. But, I have a trusty friend in my lavender oil that soothes my soul and knocks me out when I can’t sleep.”

So, how does being on your phone before you go to bed contribute to a lack of sleep? In an interview with besthealthmag, Dr. Helen Driver, an assistant professor at Queen’s University in Kingston, Ontario, said that the blue light emitted from phones and tablets is overstimulating.

She said: “If you look at how a normal day goes, dawn is bluer light and dusk, when you should be going to bed, is a warmer red light, which is less alerting.” It is the overstimulation from these devices that cause individuals to become wide awake at night.

The NHS has published guidelines that outline the importance of getting the recommended amount of sleep per night.

Research has shown that a lack of sleep can result in weight gain as sleep-deprivation causes an increased level of ghrelin, a hunger-stimulating hormone.

Chronic sleep debt can also lead to long-term mood disorders such as depression and anxiety, an increased risk of developing diabetes, and coud lead to a poor sex drive.

If you are suffering from a lack of sleep then perhaps it’s time for a social media detox. Get a few early nights under your belt and stash your phone somewhere out of reach. Put it in a place where you won’t be tempted to carry out a midnight Twitter stalk because you can’t sleep.

After all, sleep comes naturally: you can even do it with your eyes closed.