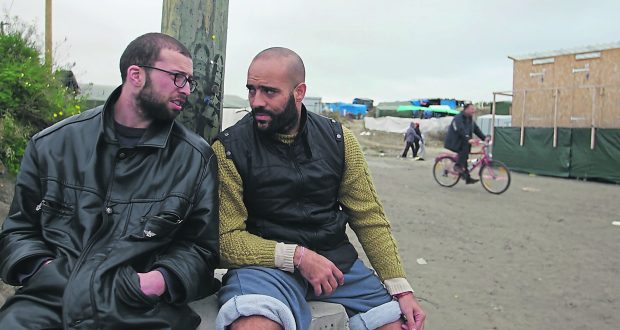 Jubeh [left] plays the role of a refugee living in the Calais jungle Photo: Lisa Lovett

A KU graduate plays a role in a short film that has won a top independent film award.

Yousef Jubeh, 24, played the part of a refugee living in the Calais Jungle, a refugee and migrant encampment in France, in the award-winning film In Another Life.

“It’s incredible that we won a BIFA award but I think, for me, it’s more about reaching as many people as possible,” said Yousef.

“The most important thing is to reach people and, hopefully, to help people understand why these people are migrating from their home countries to Europe.”

The film, which follows a Syrian refugee on his journey to Europe, won the Discovery Award in 2017, one of the 24 categories in the British Independent Film Awards.

Jubeh, who has previously appeared in the American sci-fi horror film World War Z alongside Brad Pitt, was initially contacted to work as an assistant cameraman and translator for In Another Life.

The producers started to notice that he had appeared in a number of scenes whilst they were filming in the jungle so they gave him one scene to begin with.

This turned into four scenes before he was given a character to play six months later.

Jubeh, who is originally from Palestine, said: “I was definitely up for the role. I genuinely thought that I wouldn’t be part of the film and six months later I’m the main supporting actor.

“Spending so much time at the camp gave me a good idea of what the people were like. I understood exactly what the director was looking for because I was there from day one.”

The film was shot in three parts over the course of a year.

Hannah Stevenson, one of the producers of In Another Life, said: “After reviewing Yousef’s performances from the first two shoots, I felt we could do more with his character so we decided to write in some additional scenes for him.

“Yousef was key to the success of the film. He helped us make friends in the camp as he was able to explain what we were doing to people.

“He also had a great screen presence that we weren’t aware of before the filming had started.”

The BIFA awards highlight the best and most innovative independent film and filmmaking in the UK, encouraging emerging talent and promoting British film and talent to the public.

Award-winners are selected by BIFA voters, a panel of judges made up by the Screening Group and the Nomination Committee, who undertake a lengthy discussion-based selection process to finalise the winners from over 300 entered films.

The BIFA award is celebrating its 20th anniversary this year.

Jubeh, who graduated from KU in 2016, is currently working independently on a short documentary which he hopes to release soon.

He enjoys acting as a hobby but said that it is not something that he wishes to pursue in the long run.

“I’m still at the stage of trying to figure out who I am as a filmmaker. Hopefully I can make a film one day that is just as inspiring as In Another Life.”