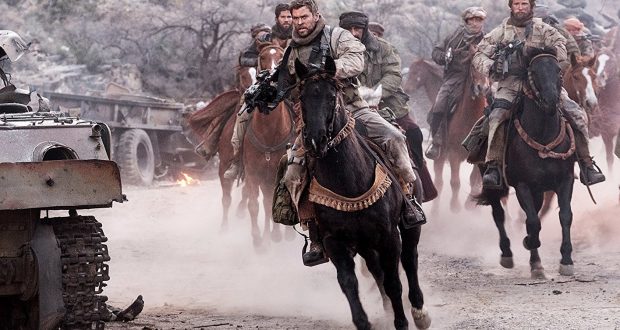 The latest American military action flick, 12 Strong, follows a squad of special forces soldiers who are deployed into Northern Afghanistan, less than two months after the 9/11 terrorist attacks that shook the world.

Under the leadership of a new captain (Chris Hemsworth), the team must work with an Afghan warlord to take down the Taliban.

Based on the Doug Stanton book Horse Soldiers we follow the soldiers as they are embedded with warlords in the Northern Alliance combating the Taliban while riding their horses through the mountainous terrain.

This is all whilst reporting intelligence on Taliban strongholds to American planes for bombing runs.

This was the first special forces team to be deployed after the 9/11 terrorist attacks, this meant the 12 Americans were all alone in an unpredictable environment with very little support. 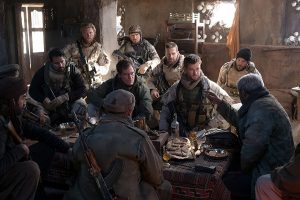 The squad plan their next move
Photo: REX

The film moves along at a steady pace, however, there are some scenes that come across a bit rushed and at times sloppy.

It does, however, provide viewers with plenty of context and background information for anyone who was unfamiliar or confused with what the mission is about.

We get to see many instances where the US made successful strides in the Afghanistan war after 9/11.

We also get to see many solid performances from the entire cast including Hemsworth (Playing Mitch Nelson) Who’s most well known for playing Thor in the Marvel films, Michael Shannon (playing Hal Spencer) and Michael Peña (playing Sam Diller).

The film is also full of some amazing visual moments, with tense and gritty action sequences and although everyone knows that the main cast is going to come out on top and triumph over the opposing force, there are some genuinely intense moments where you feel like the characters are in real danger and anything could happen.

There is also none of that annoying overused shaky cam we usually see in war films like this.

Before going into this film you should already expect that some scenes and moments will be glorified and exaggerated as it is common with films that are based on true stories.

However, this is likely done in an attempt to make the character development a lot more meaningful.

We can see they have overcome, truly challenging odds and managed to do some impressive work in the field.

The sound and score also work fairly well although it is not something that will stick with you and is not very memorable outside of the film.

It makes sense that it is fairly stripped down and subtle.  It is worth remembering the soldiers are on a covert operation and so it wouldn’t make sense to have an overblown bombastic score to go along with the film.

All in all, 12 Strong is an enjoyable film in a similar style to last year’s military hit 13 Hours.

We are given a glimpse into what these soldiers had accomplished and just how intense and challenging it was for them.

With that being said, the film felt short and rushed in places and could have benefited from a slightly longer runtime, so that all the characters could be fleshed out a bit more.

All of the cast deliver solid performances.

There is one scene in particular where you really feel that these characters have developed a unique bond after overcoming insurmountable odds.

It appears that January may soon become ‘military appreciation month’ in the film world as for the last few years, we have had some great war films come out in January and 12 strong is a great addition to the genre.

12 Strong gets three stars out of five.