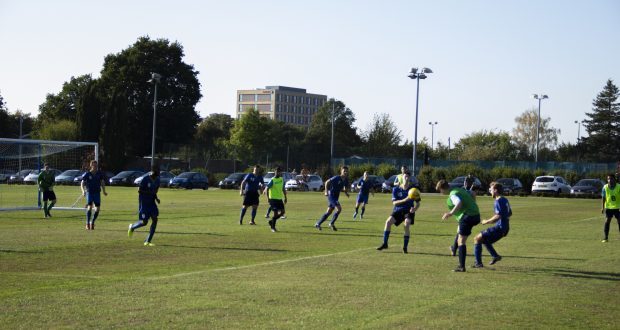 Last-gasp goal salvages a point for Kingston on season opener

Tavares managed to get himself into the box and score the crucial goal that saved the Cougars an opening day defeat.

Tavares said: “I haven’t scored in a while so it felt really good to score the winning goal, I just wish we got the three points really.”

KU had spells of dominance and held possession well but could not convert their chances into goals.

Kingston’s struggles in front of goal meant they went into the break 1-0 down.

The second half followed a familiar pattern with Chichester absorbing KU’s pressure, despite the home side having the majority of possession throughout.

The start of the season means a number of players were making their league debut and it may take them some time before they start to gel and play as an organised unit.

“We’ve got a lot of new players compared to last year.

“In the first half we were just getting more acquainted with each other. It took us a while but we completely dominated the second half,” said Tavares.

In the 62nd minute it almost looked as if it was going to go from bad to worse for Kingston when the ball was yet again in their net, but the linesman was quick to rule the chance offside.

KU were unlucky not to take the lead early on in the game and Kingston captain, Oscar McMillan, had one of his headers saved after one of Kingston’s many corners.

The rhythm of the game suggested there may be a late goal after Kingston saw two clear-on-goal chances within minutes of each other, narrowly missing the goal.

The creation of chances didn’t appear to be a problem, it was more taking them, Kingston had a series of close chances.

Team Coach, Besim Ali, said: “We had more chances and you could say we were the better team.

“If we were more clinical with those chances we could have had more goals and the game would have been 3 – 1 or 4 – 1 at least.”

Kingston goalkeeper, Reece Harper, was left frustrated after Chichester took the lead in the 32nd minute with a well-constructed goal.

Harper had a relatively quite game in goal and did not have many saves to make.

Besim said: “For me, man of the match was Wilf (Tavares) but I was really pleased with the team and Marco played really well, without his pass that goal wouldn’t have happened.”

The game was in danger of mimicking The Cougars first game last season when they lost 1 – 0 so they will be more than happy with this somewhat encouraging result.

Kingston’s first team hope to continue their undefeated start to the season when they face Brighton’s Mens 4th team away on October 17.