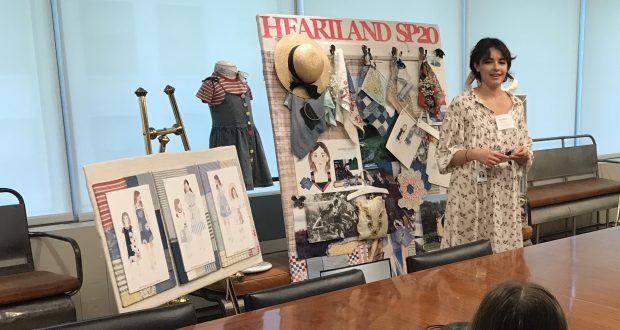 Ella Barrow showcasing her work to the Ralph Lauren team

A Kingston fashion student won the chance to showcase her work to top designer Ralph Lauren in New York during her internship last summer.

Ella Barrow was handpicked by the Ralph Lauren team to work for them during the summer at their Madison Avenue offices in New York.

Barrow said: “Ralph Lauren wanted to broaden their internship programme and make it international so they picked me for the girl and baby department.”

The fashion student spent a large part of the internship putting together a design project specifically for the girl and baby department.

“They left the design project very open to us so I proposed a project that was based around my idea of home,” she said.

Barrow, who is originally from Yorkshire, drew her inspiration from the “rolling green” countryside where she grew up.

“I realised that there were parallels between what I consider home and what Ralph Lauren considers home so I based my idea around idea of patching up clothes and making them heritage pieces,” she said.

Barrow is passionate about long lasting fashion pieces as oppose to cheaper and faster fashion that is more unsustainable.

Each of the 17 interns put together a group project where Barrows was spotted by Ralph Laurens brother Jerry Lauren who organised for her to meet with the American designer and show him her work.

“I ended up winning the competition with my project so I ended up being able to show my work to Ralph Lauren himself,” said Barrow.

Ralph Lauren, who has recently become the first and only American designer to win an MBE, was impressed with Barrow’s work.

“I didn’t get my hopes up because I wasn’t sure if he’d have time to see my work, but it ended up happening and he was so lovely it was a whirlwind experience,” said Barrow.

“To go to such a big company and get to show to the director of the company, you can’t get any better than that.”