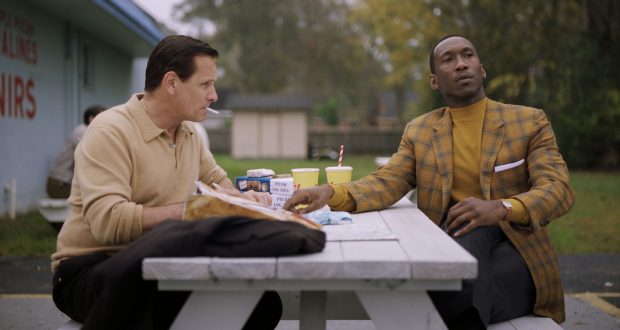 Green Book won three golden globes earlier this year including Best Screenplay in a Motion Picture and it is clear to see why.

Earning five Oscar nominations despite controversies including Viggo Mortensen, who plays main character Tony and previously played Aragorn in Lord of the Rings, who used a racial slur in an interview and issues with resurfaced tweets from director, Peter Farrelly.

Green Book is delightful to watch while also being incredibly eye opening to the extent of racism in the swinging 60s.

The real shining point of the story was the growing relationship between Tony, the charming and entertaining Italian American, played by Mortensen and Don Shirley, played by Mahershala Ali.

Tony lands a fruitful job, paying £125 per week for eight weeks, escorting Don Shirley through the Deep South on his musical tour.

While travelling south the pair refer to a green book, a guide for African Americans travelling in through segregated areas of the United States, titled “The Negro Motorist Green Book”.

All based on the true story of Don Shirley and his driver, ‘Tony lip’, the pair embark on a road trip facing difficult trials and tribulations tackling the racist and homophobic agendas of 1960’s America.

The relationship between Tony and Don Shirley is something that blossoms over time, going from a professional relationship to heart-warmingly good friends. Don Shirley even helps Tony by sending loving notes to his wife, Dolores.

Don Shirley is a regular and aggressive drinker after he states that he needs a bottle of Cutty Sark each night and proceeds to drink alone.

To begin with, a friendship between the two seems unlikely, but Tony later realises that Don Shirley’s excessive drinking is due to his sadness.

Don Shirley lives as a closeted homosexual and is in a constant battle between not feeling “white enough” or “black enough”.

Tony never comes across as condescending or judgemental, constantly offering a safe space for issues to be discussed without it needing to be explicitly said.

The bond between the two feels completely natural and heart-warming. The combination of feel good humour and the contentious issue of American systematic racism oddly works well together, never diverting from the key issue.

The radical film’s humour is visible throughout but never felt forced or overplayed. It always felt necessary and added to the plot rather than take away from the severity of the storyline.

Don Shirley is putting himself in dangerous situation in honour of Nat King Cole who was brutally beaten on stage in Birmingham, Alabama.

Green Book is a film that fills an unoccupied space in the race discussion for the nuanced narrative it provides of identity politics.

No character in the film is one-dimensional and the script does not shy away from the difficult job of portraying internal struggles.

At the beginning Tony steals a jade rock, gets in trouble and is amusingly told off by Don Shirley. Tony pretends to give it back and it keeps reappearing throughout the movie finding its final home on Don Shirley’s desk.

Tony never wants to become something he is not and this enables Don Shirley to stop adhering to others’ opinions of what he should be.

The rock symbolises Don Shirley finally accepting that both he and Tony should never change for anyone else making Green Book a genuine pleasure to watch.