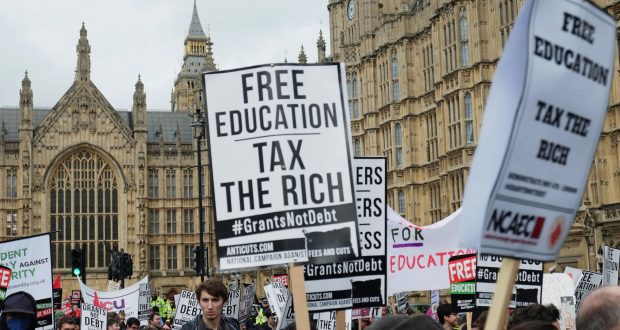 When I was nine years old, my primary school took me on a school trip to our local private school, Whitgift School in Croydon.

They had a swimming pool, a top-of-the-range computer suite and even a zoo, we were taken on tours as a treat.

I never realised how much my financial background disadvantaged me until Intergenerational Foundation, a think-tank, revealed that wealthy students avoid on average £6,000 of interest compared to students, like myself, who need to take a loan out to pay for tuition fees. To say I was irked is an understatement.

Just over 10 per cent of students pay for their tuition fees up front, in full, while studying because they are financially able to, either on their own, or in most cases, through their wealthy parents.

For the remaining 90 per cent of us, we are being charged stupidly high interest on our tuition fees even while we are studying.

While we are studying, so while a lot of us are painfully skint, we are being charged 6.3 per cent interest on our loan, which is more than double the inflation rate.

Sadly, not all of us were graced with a silver spoon upbringing, but we all deserve the right to be at university and study for something we either do amazingly well or feel incredibly passionately for or both.

It is universally known that rich students are more likely to attend better universities, but by not paying interest on loans means if a rich student and a poor student graduated from the same university and got the exact same job, the rich student would end up with more money in their account after each pay day.

Interest is a fundamental part of the loans system, it is how companies can afford to give out such hefty loans, but is it really necessary to charge a staggering 6.3 per cent while students are still at university?

If a student cannot afford to pay for tuition fees in the first place, does it really seem fair to charge them more on something they already cannot afford while they have little to no control over their financial situation at university?

Save The Student, another website related to student finance, revealed in their National Student Money Survey that 45 per cent of students use their overdraft as a main source of income.

With it being so easy to get into debt while at university, it feels unfair that this debt is being collated simultaneously with the interest on your already large sum of money.

Students can expect to pay over £8,500 in interest on their tuition fees after a three-year degree before they earn any money.

It would be silly to suggest that students shouldn’t be charged interest as it is vital to the student loan system, but it feels unfair to apply compound interest on loans while studying to better financial situations.

Proposing to abolish tuition fees doesn’t seem like the answer, perhaps it would make more sense to reduce the rate of interest so students who cannot pay upfront don’t end up with an unnecessarily steep £6,000 of extra debt.