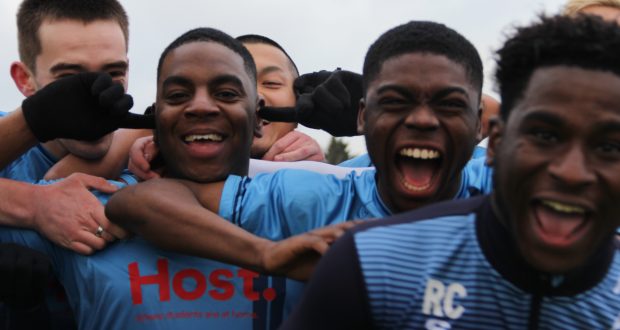 Joseph Headley celebrates his goal against LSE alongside his teammates Credit: Craig House

Written by Holly Ryan on February 6 2019

Heartbreak for Kingston’s men’s first team as their unbeaten streak in the league was ended by London School of Economics second team away on Wednesday.

Sam Naief and Dominic Wilson scored for LSE to undo a fine strike from Joseph Headley and steal the points from a dominant KU side.

KU created a lot of chances throughout the first-half, Ali said: “we need to improve our conversion rates. We’ve been working on a new system and it seems to have helped us in this game.”

Captain, Oscar Kotting McMillan crossed the ball to forward, Headley on the 10th minute and the in-form striker placed the ball right into the bottom left-hand corner to give KU the lead.

Kingston held the majority of the possession from the start of the game and retained it throughout the whole of the first half despite pressure from London School of Economics.

KU’s dominant first half performance saw LSE struggling to find a foot in the game and they had a multitude of chances that they failed to capitalise on.

Ali said: “to lose this game I feel is really harsh. Judging off of our first half performance today I think we could have ended the day being top.”

KU’s best chance to double their lead came on the 53rd when a poor save from LSE left their keeper in a fumble with the KU strikers, but despite their best efforts the ball would just not pass the line.

The game was marred by controversial refereeing decisions and when the players become unruly the referee was continuously overheard by onlookers telling players and even the coach to “stop talking”.

Olly Cox was booked in the second half after a late tackle on an LSE player and on the 54th minute another late tackle, this time from LSE, caused both sides and the coaching staff to erupt into dispute.

On the 71st minute Kingston would be left to rue their less than clinical performance in front of the goal when Naief capitalised from a corner.

Five minutes later LSE doubled their advantage from another set piece, a free kick on the edge of the box saw Dominic Wilson bundle the goal into the net after a miscommunication between goalkeeper, Reece Harper and his centre backs.

In the late stages Headley tried to tackle an LSE player but drew a foul causing the referee to give him a yellow card.

Kotting McMillan said: “I’m actually really disappointed, we were all pretty poor but we’ve got to move on from it and completely forget the two mistakes.”

Kingston’s next game is against Brighton Mens 4th team on Wednesday 30 January at home and they will be hoping to get back to winning ways.

Royal Holloway will be in action against Chichester Mens 4th team and should results go Kingston’s way they could top the table.