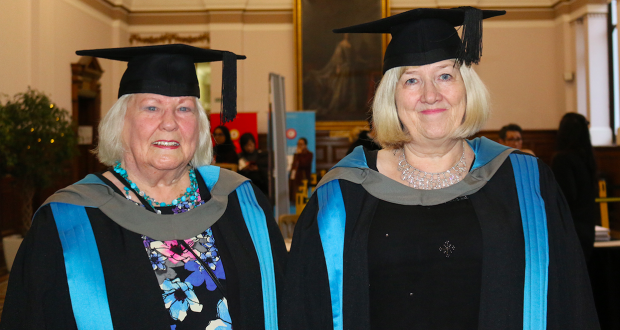 Hilary (left) and Carol (right) at their graduation in January. Credit: Kingston University

Marshall said: “I suggested the MA to Hillary and dragged her along with me kicking and screaming but it was great to have the experience together as it was much more enriching than it would have been if I had done it alone.”

For Chalkly, going back into education after leaving school at 15 due to an almost fatal case of rheumatic fever was nerve-wracking. However, she felt fully accepted by her peers and hopes to get her trilogy of novels published soon.

“I contracted rheumatic fever for the third time but after my doctor heard about a cure from London, they injected me with it. They said I wouldn’t be able to walk again but here I am.

“My mother was a teacher and I think she was pulling her hair out when I had to leave education. I think she’d have been beside herself if she was at my graduation last week,” Chalkly said.

Their lecturer and associate professor of creative writing, Adam Baron,  said: “Both Carol and Hilary were a delight to teach. Age isn’t an issue on our MA and we have students from many walks of life and their contributions helped create a lively and challenging atmosphere.”

The pensioners, although passionate about their subjects, originally struggled to find funding for their course. Student Finance England do not offer loans for people over the age of 60 meaning Chalkly and Marshall had to find other ways to fund their MA creative writing course.

Marshall said: “I had to do a bit of crowd funding and get help from my daughter and take out loans to pay for the course. We are the only group who doesn’t get help from Student Finance, so we feel like we are victimised a bit because why should everyone else get it and we can’t?”

The pair would like to continue on to get their doctorates, however lack of funding has meant that they are unable to continue studying.

Chalkly said: “My husband is 79 and he was retired but he had to go back to full time work to help me pay because I can’t get any loans to assist me. The Government are trying to get old people up and about so why aren’t they helping us?”

Despite funding issues, Chalkly and Marshall did not let it stop them getting the most out of their degree with both writers working on novels they hope to get published.

Marshall, who enjoys writing suspense romance, said: “I’m currently writing a novel called ‘Battlefields of Love’ which is set at the beginning of the war. I once had a book published many years ago by a small publisher but I’d like to get published by a bigger one this time.”

Chalkly is also working on a novel that she hopes to get published, set in a manor house that was once owned by her grandparents and that she visited as a child.

The pair are also part of the “beyond barriers” mentoring scheme which aims to help under-represented groups with their studies and have helped the women enter writing competitions with the aim of getting their work published.

Now they have finished their degree, both Hilary and Carol, would like to tell other older women about the benefits of going back into education no matter what age you are.

Chalkly said: “I always wanted to learn but I didn’t know the opportunities were there but it is one of the best things you can do in life. I want to tell older people to get off their settee’s and get out there.

“There is so much more to life and you have to go out and grab it.”