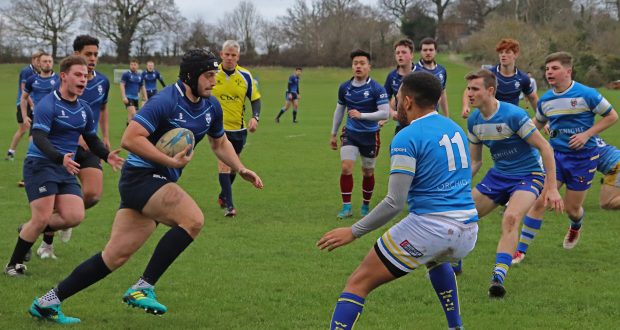 Guy Salzedo was one of the key player photo: Alex Svendsen

Written by Morgane Roos-Carreira on March 20 2019

Chichester were spirited in the first half but a clinical performance by the Cougars ensured the home side emerged victorious.

Griffiths said: “It was fun, I enjoyed playing rugby with the boys. I was able to have a lot of good lines, a lot of good runs, because of them.”

The slippery conditions made for a tricky match for the visitors and their only try came in the first half, but they failed to convert.

Kingston ensured they went into the half-time break in front after a well-executed pass by captain Adam Nilsson found Alexander Naskinov who powered through to earn Kingston another five points and allowed Griffiths to convert again.

Hamish Burdge, who is the president of the team, said Kingston struggled in the first half despite leading.

Burdge said: “The first half was characteristic of our bad performances this season a lot of ill-discipline, sloppy form in the line which led to a game that was much tighter than it should have been at the half

“Then as we went to the second half I had a quick chat with the boys and we tightened everything up and got rid of all of those faults,” he added.

Kingston began the second half confidently and the match settled into a familiar pattern with Chichester seldom being afforded the chance to make inroads on Kingston territory.

The defensive efforts of Cougars’ Guy Salzedo in particular, whose ferocious tackles meant Chichester rarely had the opportunity to add a second try, especially helped ensure that the league’s bottom club would endure yet another difficult afternoon.

With just ten minutes to go in the game, a signature run by Griffiths across half the field allowed the Kingston player to complete the rout and compound Chichester’s misery further.

At this point Cougars’ players were obviously having fun and knew there was no coming back for the opposing team.

Alex Price made an incredible pass from behind to Griffiths who came out of nowhere and ran as fast as he could to score another one of his tries.

Burdge, who did not play, congratulated his team after the final whistle blew and said that it was one of the best games they had of the season.

Nilsson added: “It was nice to have fun and end the season with a win. It did not feel like a chore it did not feel like we were put under any difficulty and it made a fun game to play with the boys. It’s going to be a fun evening with some beers.”

Despite losing heavily, the away side were gracious in defeat and even apologised for a controversial refereeing call that went in their favour.

“Funnily enough the captain from the other team came up to me just after that tackle and said ‘that was not a yellow I am sorry about that call mate’ which I thought was a nice gesture,” Nilsson said.

It was a positive end to a decent league season for the Cougars but defeats against the second teams of both Surrey and Sussex mean Kingston must settle for second this term.