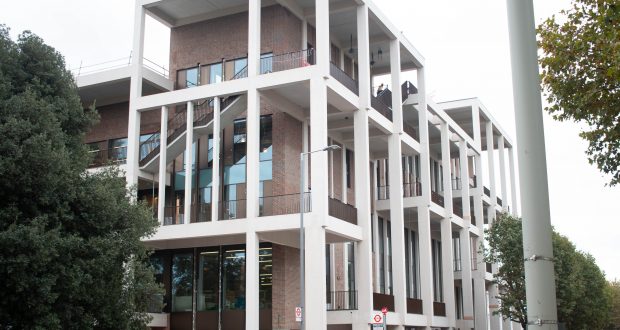 Written by Natalie Crookham on October 17 2019

Kingston University has denied delays to the Town House build despite previously advertising completion for September 2019.

The multi-million-pound land­mark building on Penrhyn Road is now set to open in January 2020, four months behind schedule.

A Kingston University spokes­woman said: “It is anticipated that the building will open for staff and stu­dents use after the Christmas and New Year holiday period on January 6.”

Some students are disappoint­ed by the delay as they had hoped to be using the space already.

Media skills student Josh Bennett was expecting the project to be com­pleted for his arrival at KU and said: “I was definitely looking forward to using the new spaces in the Town House. As a creative student, the en­vironment of which you work has a huge impact on the creative process.”

Social areas available to students, staff, alumni and the public include a covered courtyard, multiple cafes, land­scaped grounds and space for events.

Second-year dance student Nikhita Nistala said: “I was look­ing forward to classes in there. I was hoping to have at least one year in there before graduating.”

The LRC has been inconvenienced too as they were unable to move into the spacious facilities on the upper floors of the new build over the summer.

In preparation for the move, the li­brary has removed many books from the LRC shelves, and students are having difficulty accessing resources.

Library assistant Aniqa Khan said: “It is making things a bit more hec­tic. Obviously, if we could have managed to do the move over the summer, we would not have to be working extra hard to make sure it does not disrupt the students.”

Planning permission was granted in 2015, and demolition started in 2017.

From November work will begin to install a range of technology, furniture, signage and fixtures.

“Construction company Willmott Dixon is on schedule to hand the building back to the university by Christmas,” said a Kingston University spokeswoman.

The Town House was designed by Grafton Architects who won the 2020 RIBA Royal Gold Medal, the UK’s highest honour for architecture.

Grafton Architects took on the challenge to design the landmark building which would bring together students from all disciplines and be a focal point for the university and the town.

Designer Shelley McNamara said: “We want to continue to work together [with Kingston University] to give staff, students and the local community the amazing building they deserve.”

Kingston University has been investing in facilities across all campuses including the £26m Business School, £20m John Galsworthy Building and refurbishing the Student Union and Clattern lecture theatre.